So I needed another kite. I knew my mom wouldn’t spring for it. So I used what little allowance I had to get another one.

It had to be this:

The Baby Bat! This was a cool kite. Probably the coolest kite Gayla ever made. Black, with flaming eyes, and the lower edges looked like real bat wings. It too was only a dollar.

I loved my new, cool black kite. The eyes were stickers you had to put on yourself, so the spacing had to be perfect upon application. You didn’t want your bat looking cross eyed or weird. It needed to be cool and menacing.

In hindsight, I think the better name for this kite would have been the Manta Ray, because it better resembles a ray than a bat. Just saying…

Our next idea was to buy more twine. Let’s connect two or more spools of twine and make the tether even longer than 200 feet. Let’s go for 400 feet of string. It became less about the simple whimsy of flying a kite as a restful activity, and more about let’s see what these kites can withstand.

But, this is what boys do. Let’s just see how far we can take an idea before something breaks, or we’re injured. As kids we used to engage in activities that endangered our health and welfare on a daily basis.

It was called the 70’s! Nobody wore seat belts in the car, and nobody wore helmets when they rode their bikes. It was like the wild west back then. Look at jaw breakers candies. Perfect choking hazard for any child. But when you’re young all you ever think of is “I”.  I’ll be fine. I’m Indestructible. I’m Immune. I’m Immortal. You never think anything you do will have any consequences, until you start seeing kids wearing casts on their arms and legs for broken bones.

So, I tied the string together, and wound the second spool of 200 feet of string to the first one. Now I had 400 feet of tether. My kite will go higher than ever! My kite is going to go so high, a plane or even a helicopter could crash into it. Now that would be a spectacular day of fun for a couple of boys. Nothing like causing a good old-fashioned air disaster to get the blood up.

We head down to the beach with my new Baby Bat kite and a giant spool of string. The wind is up and blowing north. We follow the path through the bushes to the open beach.

Once there, we let it rip. The string is going out like mad and the kite is rising high into the twilight sky. The sea air is invigorating as I watch as my great ebony vessel rises higher and higher. I decide to place both of my index fingers into the ends of the spool and just let that sucker spin. The cylinder of twine is a blur in my hands as the line goes out like mad. It’s as if I have a fish on the line. (That, or a giant bat!)

The bat is going so high, it’s getting smaller and smaller. Soon it’ll be just an inkblot in the sky. I’ll have flown the highest kite ever!

Now, you have to keep tension on the line so that the kite stays up. If that pressure is off the kite could fall. But the wind is carrying my kite higher than I’ve ever seen a kite go. The spool spins on my fingers.

The line… still going out.

Once it reaches the end, it’ll stop, and the kite will soar even higher. 400 feet is just seconds away! My beautiful brand new kite soars like a bird.

But that didn’t happen.

What I failed to realize was that the string on these spools isn’t tied to the spool. It’s simply wrapped around it by a machine when it’s manufactured.

The final feet of the twine go out, and I’m left standing with what would be equal to an empty role of toilet paper in my hand.

The kite is so high it continues to fly. But it’s so far away and we’re on a beach, so I can’t even see the string as it slips away at high speed. I watch as my brand new  Baby Bat flies away on it’s first, and final mission. My friend is laughing hysterically as we watch the kite fly over the channel as it heads out to sea.

It probably crashed somewhere across the channel in Stone Harbor, five miles away.

So, that was the end of that kite.

I owned a few more Baby Bats that summer. I think it was my favorite kite design. Most were destroyed in sky battles or tangled in electrical lines and lost. I remember my mom saying, “You went through a kite a week that summer!”

Ahh, what a grand time we had as children each summer. Living by the sea, in the sunshine, and getting our exercise. Those experiences build strong, healthy minds and bodies. Better than any video game you could imagine.

One night, there was a land breeze from the west and my friend and I were flying the latest kite. It was a red Sky Raider.

Exciting fun for all ages! Boys, girls, and apparently old guys who smoked pipes! (for only one dollar!)

We were sitting up in the lifeguard chair. Which is the coveted spot to sit on the beach at night. You’re probably 7 feet in the air and it definitely feels like a position of power for a couple of kids. 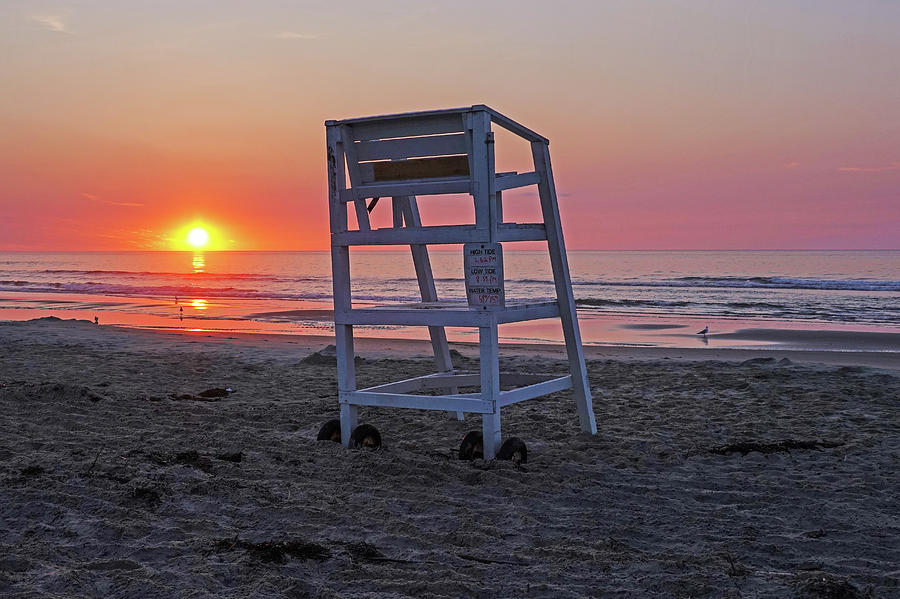 I got tired of holding  the string of my kite, so I tied it to the chair. The red kite sailed high over the Atlantic Ocean. Normally you don’t stay long on the beach during the day when there’s a land breeze. It brings all of the green  flies from the bay to the beach. They aren’t like the annoying pests you get in your house in the summertime. These suckers are bigger and ‘bite like horses’, as my dad would say. But by nightfall they’re usually gone.

So my buddy and I are just chilling in the lifeguard chair and chatting. We’re watching the red kite as it flies and dips over the sea. But at some point, the wind died down, and the kite vanished below the waves. At that point we didn’t feel like hauling in all of that wet sandy string, so we just broke the string and let it drift away. I remember before it sank it looked like a big red shark’s dorsal fin before it slipped away.

Another dollar and a half well spent. Taken by Neptune.

I wanted to change up my game. I needed a better kite.

I had heard from one of the other kids that there was a bigger and better kite that was made by Gayla. It looked like the Sky Raider, but it was bigger and had a metal controller you held to maneuver your kite.

Kind of looked like this, but much bigger. It had a six foot wing span. It was called…

I had to have it. It cost a whopping six dollars!

I scraped together what little allowance money and change I had to get that kite. It was bigger than any kite on the beach, and it had the cool metal controller included. I scampered over to the store and bought it.

I quickly assembled my great bird and was ready for action. The controller is simply a wire frame shaped like an hourglass that you hold horizontally like an airplane controller. (Don’t get too excited. Think, cheap-ass, coat hanger bent into a metal bow tie.)

You actually needed two spools of twine to operate the kite properly. They were both hooked to the controller and the other ends were attached at two different points on the kite’s brindle. This is so you could steer and maneuver your amazing kite.

I was about to become the Lord of the Skies in Wildwood.

I made sure the string was securely tied to each spool before I hand wound them both back onto each cylinder. I affixed the ends of each cord to the appropriate spots on the kite.

We took my vinyl Phoenix to the beach for it’s maiden voyage to the heavens. The wind was blowing from the south which was perfect. This way, if anything happened it wouldn’t crash in the sea. It would land on the beach north of where we were standing.

I slowly let out the string, and my great winged toy was carried upward. It looked enormous. Some people who were still on the beach at dusk, looked on with pride and amazement at the kid with the amazing kite.

I was so proud as I watched it sail higher and higher. Such an enormous pull on the strings. Huge kite. More wind resistance coupled with great aerial strength and elegance. My beautiful winged beast flying high. It’s glorious six foot wing span, like some great albatross, controlled only by my willing hands. I held the controller and watched as my kite flew higher and higher. We were coming to the end of the string.

That moment where the line would become taut and the kite would fly even higher on the tension of the lines. I would proudly steer it along the beach as startled onlookers watched the glory of my passing.

The anticipation was exhilarating as the end of the spools approached. Within seconds, the strings went taut.

The force was so great it yanked the controller from my tiny hands.

I watched in mute protest as the controller flew from my grasp and bounced down the beach.

My friend and I gave chase. Running as fast as we could in an attempt to catch the bouncing metal frame as it bounded down the beach. It had enough weight to keep the kite aloft, but was light enough to escape from us.

We eventually ran out of energy as the kite flew further and further away.

Another kite had made its escape. It would probably crash like the last on the other side of the channel in Stone Harbor.

I’ll always look back on my times at the shore with fond memories. Some of my greatest moments happened on that sandy stage.

Here’s a great song that serves as a soundtrack to this story.

Why couldn’t this have happened to us?

My new books, Phicklephilly 2 and Sun Stories: Tales from a Tanning Salon are now for sale on Amazon!