The Wildwood Twin Drive-In owned by Fox theaters of Philadelphia opened on July 28, 1950, as a single-screen drive-in. In 1976 a second screen was added. This drive-in had a capacity of 470 cars.

The Wildwood Twin Drive-In closed after the 1986 season. The original address was Wildwood Boulevard (Route 47) at exit 4A of the Garden State Parkway.

The drive-in theater was the idea of Richard M. Hollingshead who opened the very first drive-in theater in Camden, New Jersey on June 6, 1933. It wouldn’t be until 1950 that Cape May County would have its own drive-in movie theater. Mel Fox, of Fox Theaters from Philadelphia opened the Wildwood Drive-In theater on a 13.5-acre lot on Wildwood Blvd., in Rio Grande. With space for 470 cars, a Simplex X-L projector and a sound system with Simplex in-car speakers, the drive-in was ready for its grand opening, Friday, July 28, 1950, with the showing of “I Wonder Who’s Kissing Her Now.” The box office opened at 7:30 pm with a 60-cent admission per car. Free popcorn was given to everyone on opening night. They ran two shows each night during the week and three shows nightly on weekends. The property was sprayed with DDT every week. Sometimes every night! (Darn mosquitos!)

In the Fall and Winter of 1981, my father taught me how to drive. We would go out each morning and I would practice driving our 1969 Volkswagen minibus. It was a four-speed manual transmission and had a blind spot on the back right quadrant of the vehicle. So it was fun to try to parallel park that sucker. Especially fun was learning how to K-turn the van. Each street had a crown for water drainage in Wildwood, so the vehicle would roll and stall out all the time as I struggled with the gas, clutch, and brake. But in time I figured it out, (with my father’s patience) and soon I could hold the van on a hill and even roll it back and forth on the incline using only the clutch and brake.

I passed my driving test and my dad gave the van to me. You can read all about the history of that family vehicle in the links in the above paragraph.

The Summer came around and I now had possession of the van. One of the first things I wanted to do was take my friends to the drive-in movie out in Rio Grande off the island. I always loved movies and especially horror movies so it was a natural progression for me to want to hang out there.

We’d drive out Rio Grande Avenue which turned into route 47. Delsea Drive as it’s better known. The reason route 47 was called Delsea Drive is that it runs from the Delaware River to the Atlantic Ocean. (Get it? Delaware to the Sea. Del-Sea!) When you passed the bay and the grassy sound and you’d arrive out in Rio Grande on the mainland. There were shops and roadside vendors and even a little mall out there. (It was more like a small enclosed shopping center) There were a few old motels out there and maybe a trailer park or two but what stood out was on the right was a drive-in movie theater.

I had heard of them as a kid and thought it was a cool idea. Just sit in the comfort of your car and watch a movie. You could eat drink and talk and nobody would bother you. When I was a kid I would sometimes see the big screen of a drive in while we passed it at night in the car. I just thought I had to experience that one day. So once I had the van, I was going to make that happen.

We pulled the van off the road and into the entrance through a grove of trees. Sort of like a little tunnel of trees that you had to drive through to get to the box office. The path was littered with broken seashells that crunched under your wheels as you rolled up to buy your tickets. It didn’t cost that much and people were always sneaking their friends inside the trunks of their cars. But we had the van and all they had to do was look inside and see who was in the car. As I said, it was cheap and we didn’t mind paying for whoever was in our crew.

We’d get there at dusk just to get a good spot and hang out a bit. It was cool. the surface of the lot had these humps of dirt built up that you’d pull your vehicle onto just to raise the nose of your car to point the car toward the big screen. You’d pull your car up to one of the speakers that hung on poles that were stuck in the ground all over the lot. 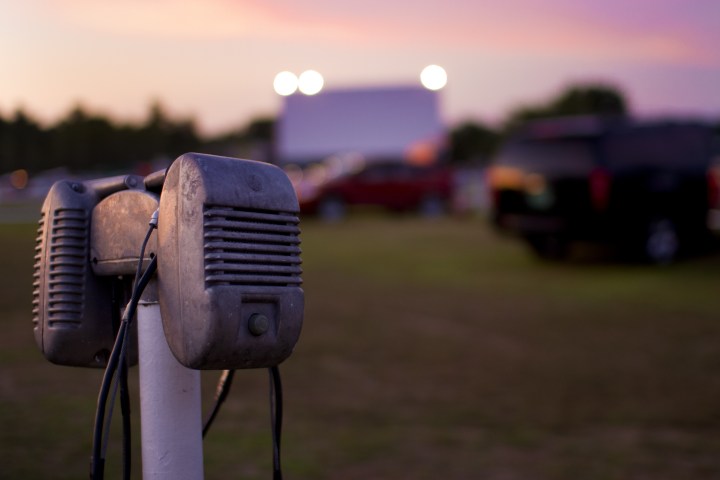 They were these big metal waterproof portable speakers that you unhooked from the pole and then hooked them on the edge of your driver’s side window. It had a volume control on it and that was it. Many of them didn’t work or were badly oxidized from being outside for years. But for the most part, they did their job. You don’t go to the drive-in for a rich film experience and superb audio quality. You go to the drive-in for the fun of it.

A lot of people back then would bring their kids with them. The parents got a night out and didn’t need a babysitter because most of the time the children would pass out and sleep in the backseat of their car or station wagon by the second feature. But for the most part, it was young people and teenagers like us just looking to do something different on a summer night. (You can only have so many nights on the boardwalk and in the nightclubs before you need a break!)

By the time we arrived at this drive-in, it was already 30 years old and its best days were behind it. The screen was a little banged up and so was the old wooden plank fence around the lot. But here’s the cool thing about that. Once night fell, you could walk over to the fence toward Delsea Drive and slip through a hole in the fence behind whatever stores aligned the fence. So we’d go over there and zip through the fence and no one would see us. Once outside the lot, we’d walk about 30 yards to a roadside liquor store and grab a few 8 packs of Miller ponies. We didn’t drink much back then and those mini beers were enough for us, and they were small enough to stay bubbly and cold on the floor of my van. We’d sneak back under the cloak of darkness and have our beer and snacks for the show. I wonder now why we didn’t just buy the beer in Wildwood, hide it in a cooler in the van and then go to the drive-in. Maybe we thought they would check the car and I know there was a “no alcoholic beverage rule” in place at that theater. So maybe that was it. But it was actually more exciting to pull a caper and sneak through the fence and get our beer.

We’d hit the snack bar and try not to get devoured by the hordes of mosquitos that ruled the place at night. I remember keeping a can of OFF behind the seat of the van just for that reason. We’d buy popcorn, nachos, soft pretzels, and whatever other kind of junk food they sold there. We’d load up and head back to the van.

I found this great video of intermission shorts on Youtube. I love how it takes me back to being at that beat-up old drive in theater. The campy voiceover, the crap animation, the photos of the “delicious” food which was terrible and even looks bad in the photos! Such great memories!

Once it was dark, usually just before 8 pm, the first feature would begin. As I said, the place had already been there for 30 years and all they normally showed at that theater during the week was horror movies. Mostly slasher films from the late 70s which were all the rage since the inception of John Carpenter’s Halloween. (I remember one evening we laughed through  Bucket of Blood and Demonoid!)

We loved it. Most of the films were bad but made in earnest by the filmmakers. We didn’t care. We’d watch them and eat, sip cold beer, and smoke cigarettes, and were in our teenage glory.

One night I recognized my friend Joe’s (Best bassist on the island) car a few yards ahead of mine. I thought I’d walk over and say hello. I tried to peek in the window, but they were all steamed up. I tapped on the glass and the back window rolled down. Then I saw my pal Joe with his shirt off and beneath him lying on her back was some pretty girl. I quickly backed away from his vehicle and apologized for interrupting his movie experience. (Which neither of them were watching!) So I realized that the drive-in was a cheap, mobile hotel for amorous couples!

One of my most enduring memories of that place was in 1984 when I took my girlfriend Betty Ann to the drive-in. She had never been to a drive-in movie so it was all new fun to her. We pulled up in her blue BMW 5 series and had a grand old time. We drank beer, smoked pot and saw Footloose and Indiana Jones and the Temple of Doom, which was a fantastic night. She loved it and I found out first hand that the windows really do steam up pretty quickly! (I’ll be covering the full Betty Ann saga in a series this fall, so stay tuned!)

Once a group of us went to the drive-in and I pulled the van up on the hill sideways. I opened the sliding door on the right side and the passenger door next to me. I passed around the can of OFF spray and everybody grabbed a beach chair I had brought and sat outside the van. I went over to the two speaker poles that were at each end of the car and left them on their poles and just cranked up the volume on each one. So we had four speakers going. We all camped outside around the van and could hear the show. They played the film Purple Rain and everybody went wild over that. It was a spectacular night of music and laughter. (After that, who didn’t want to cleanse their soul with Appolonia Kotero in the waters of Lake Minnetonka?)

Years later they tore it down and put up a shopping center and if you went out there now you’d never know the place ever existed. The advent of home video rentals killed the drive-in movies.

It now lives only in my memories.

I’d love to hear your comments on what your experiences were at this amazing place!

Check out my new book, LAWNDALE on Amazon. It’s packed with stories from my youth growing up in Northeast Philadelphia!

My next book, DOWN THE SHORE, a collection of stories from my summers in Wildwood in the 70s will be released in May of 2023!