These were my final day in New York. I had moved up there in 2005 for the company I was working for. By this point, I was working as a consultant for a firm that cleaned up smaller banks and credit unions. My office was at the corner of 34th and 5th Avenue, across the street from the Empire State Building.

My friend Duncan, who I’ve been friends with for over 20 years now, found out that Black Sabbath would be kicking off their latest tour at Radio City Music Hall.

Black Sabbath are the godfathers of heavy metal.

I’ve written about their guitarist, Tony Iommi before in this blog. It’s quite interesting and will give you insight into how the Sabbath sound was accidentally created. Check it out!

Black Sabbath began in the late 60s and played with singer Ozzy Osbourne for most of the 70s. But when Ozzy became too drunk and drugged out he was kicked out of the band. He was replaced by Ronnie James Dio another godfather of metal.

I love the early Sabbath albums. The first four to be specific. But two of my favorite albums the band ever made are Heaven and Hell and Mob Rules made with Ronnie. They’re perfect bookends of the Dio Years.

The band was reuniting with Ronnie for a special tour called The Dio Years and we had to attend. The tour of North America would debut in Manhattan and that show would be recorded for an upcoming live concert DVD to be released in 2007. But they had just released a CD to refresh the memories of the fans of the Dio years.

One of the things that Duncan and I have always had in common was our love for hard rock and heavy metal. You can find our stories here.

He bought the tickets and flew up to the city and stayed at my apartment in Jersey City. We met up and hung out in the city. We went out to lunch together and even flirted with some old ladies in the restaurant. We were just being our usual mischievous selves. Two metalheads wandering around the city.

But by nightfall, we were gearing up for the show. After several drinks and Duncan smoking from a little one-hitter I got for him, we were ready to rock.

We went to the show and to be honest it wasn’t like any metal show we’d ever been to. Most shows we attended were a sweaty, drunken, drugged-out mess. I mean, we were always well behaved and just banged our heads in metal fury, but this was Radio City Music Hall. Security was super tight, and there was no smoking in the theater. I don’t know if you’ve ever been to RCMH but it’s a nice place. Really nice. Great acoustics to play and record a live show, but there would be no monkey business at that show. So the crowd was subdued.

Whenever the band played anything from Heaven and Hell or Mob Rules we would rock out. But if they played anything else they did with Ronnie, that was my cue to go get us two more beers.

The show was great and we had a great time as always. We got out of the concert exhausted. Of course, Duncan had a strong case of the munchies and immediately headed for a food cart. I stayed away from street meat but Duncan wasn’t hearing it. He proceeded to devour a couple of kabobs.

We made our way to the PATH train to get back to Jersey City, where I was currently residing. I was surprised how many people were on the same train at that hour and we were sausaged in there with a ton of other people.

We finally made it back to my house, and it was a race to the bathroom for Duncan. I told him not to eat food from a Roach Coach, knowing this could happen. But he was fine.

He crashed at my place, and the next morning he was to head back to Charlotte, North Carolina where he lives. I asked him if he could stay longer because the band was going to be at Best Buy in two days to do an album signing.

But Duncan being the consummate employee to the bank where he’s worked since 1993, said he had to go.

But, I was determined to go back to Manhattan and meet the band if possible.

Two days later, I headed back over to Manhattan. When I got there, the line of fans went out the door of the store, around the corner, and down the street. I got at the end of the line around 5 pm.

The great thing about having to wait in a long line to see your heroes is, you get to meet and chat with a bunch of other people that all have the same thing in common. We are all there for the same thing. So it’s not boring because you can trade stories and talk about the band’s music. It was a nice day, so I was happy to be there with my rock n’ roll brethren. I wished Duncan had stuck around but I really wanted to see if I could meet them.

After about an hour or so, I finally got inside the store. The limit was 3 copies of their new album. So, of course, I bought 3. When I finally got up front I took a couple of photos.

Of course, once I was in the eye and earshot of the band I made sure they heard me say in my best Dio impression, “I’ve been waiting so long to see you guys, I feel like I’m the last in line!”

(That’s a line from a Ronnie James Dio song and I got a laugh from the band!) Yes!

But the best part was actually meeting the godfathers of heavy metal. When it came to my turn, I had all of the CDs open and had pulled out the liner notes to get them signed. I dropped them onto the table in front of Tony Iommi. I put out my hand and he took it to shake.

“Your welcome. It’s been my pleasure.”

I was so caught up in the moment of meeting one of the gods of rock, I wasn’t paying attention to where my liner notes they were signing went. I looked down and they were gone.

A voice came from the man sitting next to him. “I think they’re moving down that way.” 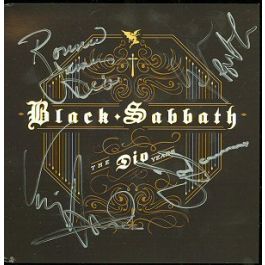 I looked over, and those words came from the mouth of the man himself.

“Thank you, Ronnie James Dio!” I shook his hand and it was a glorious moment to stand before the golden voice of all British heavy metal. He looked really old and small, but I knew in my heart that tiny gnome held great power. He signed my stuff and passed it down to none other than Geezer Butler! The man who wrote many of the great Black Sabbath songs.

I shook his hand as well and thanked him for all of the joy he and the band had brought my friends and me over the last four decades. Vinnie Appice had replaced drummer Bill Ward for health reasons so it was no big deal to meet him. (Sorry, Vinnie)

I walked outside with a guy I had met in line, and we carefully held all of our liner notes out to let the sharpie signatures dry. We headed over to a bar and shared a laugh and a beer.

It was a beautiful few days in my life and a nice cap to my time in New York. In two months I’d be living in Pennsauken, New Jersey with my ex-mother-in-law. But that’s another story.

I was living in Philadelphia by now and working at Philly.com. I was doing well, had a beautiful girlfriend and everything was right in the world. (As much as it could be)

I heard that Ozzy Osborne was going to be at the Borders book store at the corner of Broad and Chestnut. (Now a giant Walgreens) After work, I headed over there. I bought a copy of his new book and got in line. It started on the first floor and went around the store and upstairs. Ahh… always a line to see the gods of rock.

Here’s some stuff about him from the blog.

When I finally got up to meet him, I couldn’t believe I was standing there in front of the amazing OZ! I handed him my copy of his book.

And security pushed me along so the next fan could get their book signed.

Not as great as seeing his former bandmates and Dio three years earlier, but  I was at least happy to get his book and autograph. I did get some better pictures at this event though.

This band made so much great music over the years I’ll listen to their records until the day I die.