Before I begin this story I have to tell you something about my father. I said this about him in his eulogy. With my dad, anything worth doing was worth overdoing. Now, that didn’t apply to anything negative like booze or drugs or anything. My pop was a pretty straight shooter but what I meant by that statement was, he went big on anything he liked.

I’ll give you an example. I think this was back in the ’90s. When my older sister’s son was little he spent a lot of time with his grandpop. (My father) He loved playing with toy trains with my dad, and of course, my father was a huge toy train collector. He had tons of toy trains. Lionel trains were his favorite.

He set up a little ring of track on the floor in a corner of the attic. This way they could go up there and run the trains and watch them go round and round. I’m sure this delighted my nephew. But when I saw it I said to my father, “Isn’t this just the beginning, dad?”

“This is how it starts.”

“What are you talking about?”

“Aren’t you going to start building this little ring of track out bigger and bigger until it’s gigantic?”

I even joked that he’d build a train layout so large that it would run the entire length of the attic. It would be an enormous museum-quality setup, with multiple lines and trains running on it, villages, buildings, cars, people, and whatever else he could turn it into.

Cut to a year or so later, and he did just that. It was the biggest train layout I’d ever seen. A giant wooden platform was constructed three feet off the floor. Multiple trains running on several different tracks. Lights, switches, several transformers to run it, whole villages and towns built throughout. It was absolutely brilliant.

If you went into someone’s house and went up in their attic and saw something like this, you’d say, “Who the hell built all of this?”

So, you get the picture. He liked to take something and go big with it. It was massive and beautiful. My father loved it. He once said, “My toy train layout. It’s the only world I can truly control.”

Let’s jump back to Christmas, 1972. We were celebrating the holidays just like always and it was great. We all got plenty of toys and everybody was happy. It was probably the happiest day of the year in my house growing up.

My dad knew a younger couple he was friends with that he knew from the bank where he worked. They were cool people and we all liked them. They were around a lot and were interesting, fun people.

They gave the family a present that year. Or, maybe it was for me. Maybe they gave something to each of my sisters but I didn’t notice. Because the present they gave was a little racing set.

No one I ever knew in the 60s and 70s dressed like this in real life to play. (And who are those little guys driving the cars?)

I knew the name Aurora because I liked building little models when I was a kid. Aurora and Monogram made the best models, but Aurora had this line of slot cars and racing sets they manufactured. This was a fantastic toy.

In the box is enough track to make the double eight configuration, two controllers, and two cars. One was a little red Mustang that was okay, and an old tan Lincoln that looked like it was modeled after a car from the 40s. I liked the idea of a racing set and playing with little cars but these two they gave you in the set were kind of lame. But… it was so you would go out and buy more of the cooler cars they made. 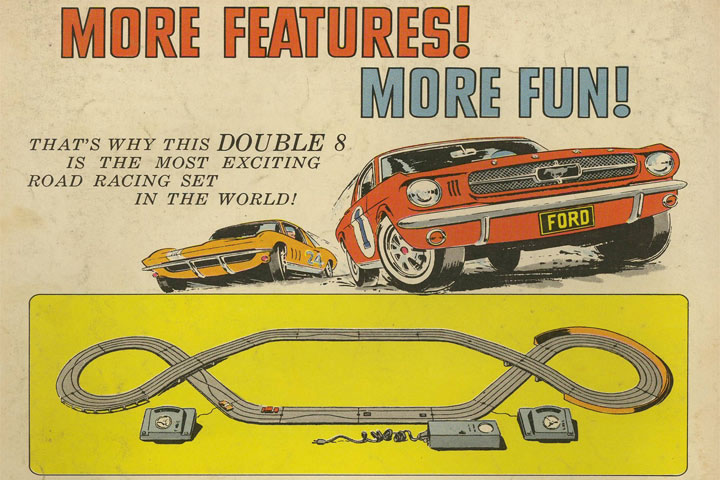 That’s a yellow late 60s Corvette. They didn’t give you that car. I can’t even find a picture on google of the old Lincoln the set came with. (I love how it says: The Double 8 is the most exciting road racing set in the WORLD!)

Here’s what the controllers looked like. You turned the wheel to the right to accelerate and left to slow down. There was a little switch on the right to change directions, and a brak button on the left which killed power to the car and it would stop short. It was so intense sometimes the little steering wheels would end up breaking from the sheer pressure of the hands upon them. Thrilling racing action! (lol)

In our basement, we had a pool table. We also had two boards that made a ping pong table you could place on top of it. So my dad set up the small race track on the ping pong table. He wired it all up and it was cool to race the little cars around the track. But my dad being the man he was, got interested in this little pastime. Not just for us kids, but for the adults.

He went out to the local Kiddie City and hobby shops in the area and started researching how he could expand the layout.

I don’t know how long it took, but probably only a few months into the Spring of 1973, and the little racing set was rapidly becoming larger.

I liked it because I could have some of the boys in the neighborhood over and we would play for hours down in that basement with the racing set. The raceway kept getting bigger and better.

From that one little gift, my dad turned it into an incredibly fun racing track. At one point he made a layout that was four lanes wide, with four controllers, and electric lap counters. He and my mom would be down there entertaining their friends, having drinks, and having these epic auto races while we kids were asleep in bed. I’m talking 100 lap marathon races that went on for a long time. Some people would be racing cars and others would act as spotters if a car fell off the track during the race. It was like Indianapolis down there.

My dad and his friend were famous for whipping out a “secret car” that no one had seen before just to make the racing more thrilling!

Dad even went out and bought a record album that was just the soundtrack from different real races around the world. Like Grand Prix and Le Mans! This way when they were racing the sounds in the background made it seem even more real. It was great!

Then the cars started. The Batmobile. The Green Hornet’s car (Black Beauty) A few Corvettes, Ferraris, Cheatahs, etc. In no time we had over 40 cars. All different colors, and even fleets of all the same model. (Like real racing teams!) I feel like at one point we had at least one of every car that Aurora made for slot car racing.

Yep, dad always went big and it was glorious.

Everybody had their favorite car, and mine was a white Mako Shark. I loved it because it looked like a Corvette Stingray and that was my favorite car in real life back then.

My dad was always bringing home new cars and cool accessories for the layout. The coolest thing ever was something called a Hop-Up Kit.

Inside this little box was equal to finding the Ark of the Covenant to me and the boys. For under a dollar you could soup up your car to make it not only faster, but handle better on the track.

Better pick up shoes and brushes to generate better power current into the motor, Bigger crown gears to make the wheels turn more revolutions per minute, fatter tires, bigger rims, and cool decals to dress up your cars. This little box of goodies changed the whole game. We had a few of these on hand at all times. My friend RJ and I would soup up our cars and beat everybody else’s cars.

I never bought any of this stuff. My dad just kept finding more cars, curves, controllers kept bringing them home. It was a toy that kept on giving and kept all of our friends entertained for hours. (My sisters and their friends too!)

Here’s my friends RJ McMeans and Wayne Kachelries going head to head, while my middle sister and I keep our eyes peeled in case a car goes flying off the track. (Look at that 8-foot straightaway!!!)

That curve you see closest to the camera is called a Daytona Curve. It was banked so you could go around it faster without crashing. We later added a Monza curb beside it. This was an amazing racing layout!

I’ll never forget all of the hours of fun we spent as kids in that basement at 312 Magee St. It was nice and cool down there and just a fun rec room for us growing up.

Later as teenagers, we’d play ping pong and shoot pool down there while listening to all of our records on my dad’s stereo. (The GOOD stereo!)

Even now, at almost 60 years old, I’d still love to play with a racing set like this!

I think a lot of people would agree with me.

Final Note: My youngest sister read this article and sent me the following photo. Apparently she saved 3 of her little slot cars all of this time and still has them! Amazing!!!