More than 150 years ago, Edgar Allen Poe, literary icon and father of gothic horror, died a dark and untimely death. His demise is shrouded in so much mystery, the story could easily be plucked from the pages of one of his books.

Edgar Allen Poe is a name synonymous with suspense and dark romance. His poem “The Raven” is a classic that still appears in modern pop culture, and yes, a football team named themselves after it. Without his book “The Murders in the Rue Morgue,” the world’s very first detective story, we very well might not have the likes of Sherlock Holmes and Hercule Poirot. His beloved moody aesthetic has even inspired other prolific cultural icons such as Salvador Dali and Alfred Hitchcock, according to Biography.

And with the recent news that Mike Flanagan, creator of Netflix’s “The Haunting of Hill House,” will be adapting “The Fall of the House of Usher” into a series, Poe’s name is buzzing around yet again.

Though many of us can recite a famous morbid line or two, not everyone knows about the tragic life and utterly bizarre death of the Master of Macabre.

It seems Poe was destined to become well acquainted with melancholy, and even some scandal. Born to transient, alcoholic actors—both who died within a few days of each other—Edgar was sent off to a foster home when he was just 2 years old. Later, at age 27, he secretly married his cousin Virginia … who was 13. To be fair, we’re still not sure if this was indeed a romantic relationship. It’s certainly a conversation starter in cultural relativism circles though. Oh, did I mention that the controversial relationship was also cut short by death, when Virginia was overcome with tuberculosis? Are you surprised? Me neither. 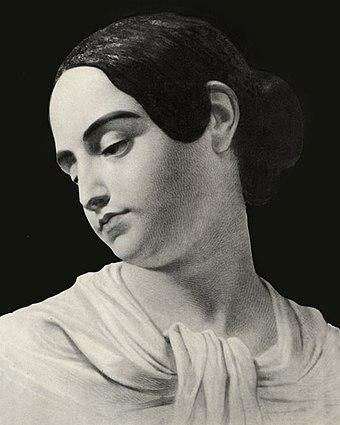 During his life, Poe was the poster boy for “starving artist.” Struggling to make any sort of money from his work, he resorted to gambling to pay off debts. Spoiler alert: It led to more debt … We’re talking burning your furniture to stay warm kind of poor. Not a good look. It eventually led him to joining the army to escape his creditors.

“The Raven” was Poe’s first worldwide success. Other works like “Tales of the Grotesque and Arabesque” and “The Tell-Tale Heart” began gaining popularity and critical acclaim. At long last, the writing career he had pursued since the age of 13 was finally coming to fruition. 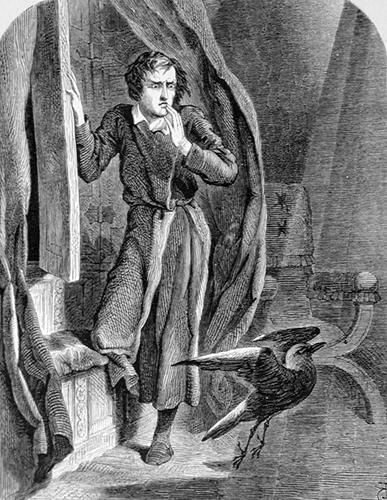 The Raven by Edgar Allan Poeupload.wikimedia.org

Once upon a midnight dreary … it was a rainy night in Baltimore, 1849. Election Day (more on that later), a man was found addled, immovable and in the shabby clothes of a stranger. That man was none other than Poe. He spent the next three days in delirium, flowing in and out of hallucinations and calling the name “Reynolds,” who to this day, is unidentified. The great poet’s last words ever uttered were said to be: “Lord help my poor soul.”

Though an official record states the cause of death as “brain swelling,” it has sparked much speculation and alternative theories.

There’s the good ol’ fashioned “beating by ruffians” theory, thought to have happened after friends left Poe in a drunken stupor. Or, for something a bit more sensational, the gang fight could have been instigated by a woman who “considered herself injured” by Poe. Seeing as Poe had a reputation for tumultuous romances, this is entirely plausible.

Then there’s a possible “cooping.” Don’t know what “cooping” is? I didn’t either. But Smithsonian Magazine defines it as “a method of voter fraud practiced by gangs in the 19th century where an unsuspecting victim would be kidnapped, disguised, and forced to vote for a specific candidate multiple times under multiple disguised identities.” It added that before Prohibition, alcohol was often given as a reward for voting. So basically, Poe could have been voted to death. You really can die from anything.

One doctor has hypothesized that rabies was to blame. This theory has a few reported kinks to it, however, as there was no evidence of hydrophobia. Yeah, apparently a common side effect of rabies is a fear of water!

A more modern theory developed when Poe’s grave was dug up and, inside his skull, an unidentified mass was found. A mass that studies now show could have been a lethal brain tumor. I, for one, could see a mind like Edgar Allan Poe’s eating him slowly from the inside in silent agony. And they say that you don’t have to be pained to be creative.

There are still other theories of carbon monoxide poisoning, heavy metal poisoning, and, yes, alcohol poisoning. Though that last one is a tad boring. 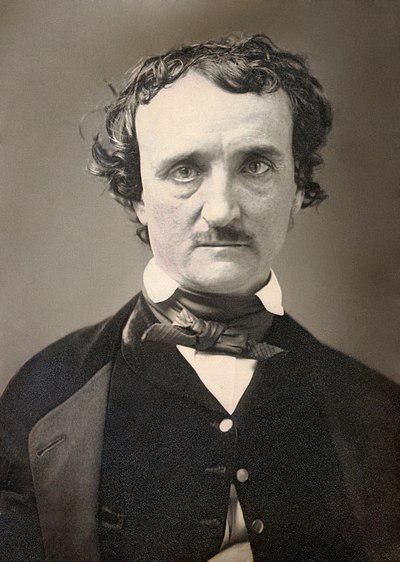 No matter which theory ends up being true, the legacy of Edgar Allan Poe is one that continues to bewilder, inspire, disturb and delight us. In a way, he is the absolute epitome of transfiguring the grotesque into the beautiful, both in life and in art. And his romantic, yet sorrowful spirit lives on in our retellings of his beloved classics.

Though he himself is nevermore, his poetic style will remain timeless forevermore.

Today begins an entire week’s worth of Halloween-related posts. Enjoy!

Pandora was on a mission to find the “scariest song of all time.”

So the Oakland-based internet radio company started looking at the many factors that go into making a song sound sinister. In all, 450 attributes were evaluated by the Pandora team.

“Scary songs use key, tempo and timbre to create tension and manipulate the way the listener interacts with sound,” according to a news release. “This includes the use of what scientists call ‘non-linear’ sound. Non-linear sounds are generally scratchy, disorganized, and chaotic, like the sound of vocal cords vibrating violently during a blood-curdling scream. Humans (and many other species) are hard-wired to perceive such sounds as life-threatening.

The song that topped the list turned out to be Nine Inch Nails’ “The Becoming.”

Here are the top 10 scariest songs of all time, complete with commentary from Pandora:

“This song makes use of distorted “non-linear” instrument timbres and effects, which humans are programmed to find distressing. This contrasts with the hushed + screaming vocals which creates a suspenseful & unsettling mood. Melodically, this song makes use of an exotic-sounding scale, which features a major third, but a flat second scale degree, which gives a dissonant quality.”

“Like ‘The Becoming,’ there is more use of distorted, ‘non-linear’ sound along with aggressive vocal attitude, and this one is in a minor key, which is usually perceived as a ‘dark’ sound.”

“The mood of this song is dominated by the tonal quality of the instruments, including distorted riffs and scratchy guitar solos. There is a high level of dissonance between the chromatically descending guitar line and the vocal, which is not a melody exactly, but a series of monotonic, almost unrelated pitches that clash with the accompaniment. The lo-fi aesthetic and freaky vocal delivery make for an unsettling experience, like being chased through the woods by a chainsaw-wielding maniac.”

“The combination of lo-fi production, synth pads, and an exaggerated reverb effect creates a menacing, claustrophobic quality. The song finishes with an intense wall of sound, which along with the staccato and insistent bass guitar rhythm makes this a truly anxiety-provoking track.”

“Due to its sheer aggression, it’s a typical example of the death metal genre: it’s loud and distorted, includes a fast tempo, makes use of technically proficient drumming and guitar riffs, and is rhythmically complex in the form of shifting tempos and syncopated hits. The vocals are extreme and gritty and a good example of the ‘death metal growl.’ Lyrically it’s confrontational and threatening.”

“Similar to the Lamb Of God in its aggressive, confrontational vocal attitude, ‘nima also features loud distorted tones throughout. Still, there is some dynamic range too, with some quieter, more drone-like stretches.”

Like many Nirvana songs, this one defies pop conventions. The harmonic progression is difficult to pin down as major or minor, but there is an unmistakable dark and menacing quality to the music. There is a dissonance between the vocal melody and instrumental parts that is disorienting and can be a bit disturbing to the listener. It makes use of heavy, distorted tones, but also features quieter, brooding stretches.

This song relies on loud, distorted timbres, and some ‘non-linear’ tones to create an aggressive, frightening effect that will transport you straight to the dungeon of despair. The relentless pounding of the drums and the deep, sludgy doom-guitar riffs give this song a truly menacing and diabolical feel.”

9, A Perfect Circle, “Thinking of You”

“This song has a creepy combination of tones, including heavier distorted ones, alongside more ambient & suspenseful tones that will leave you convinced the demons are watching you. The melody at times makes use of an exotic-sounding scale that adds to the mood — the first two vocal notes you’ll hear from a ‘diminished 5th,’ a musical interval which since the 18th century has been nicknamed ‘Diabolus in musica,’ or ‘The Devil in music’ due to its dissonant quality.

Eternal Refuge is another Death Metal entry, therefore it’s extreme in its volume and distortion, with that famous ‘death metal growl.’ Try putting this on at home in the dark.”

Wanna be a better guitarist? Click this link to learn the secret!