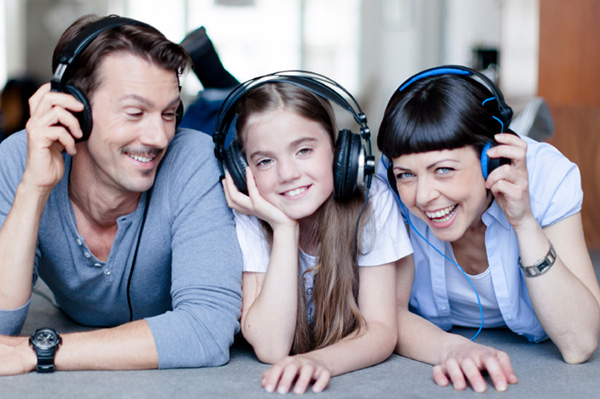 If there’s one universal truth to parenting, it’s that whatever songs your kid listens to will end up on repeat in your head at 3 a.m. Most of the time we’re fighting off tunes about frogs or balloons or shapes from Little Baby Bum, or we’re reluctantly humming a particularly annoying little ditty about a family of sharks (and just like that, dear reader, it’s now in your head too. Sorry).

Look, we have the power — the obligation — to introduce our kids to better music, for their sake, and very possibly, our own sanity. Nursery rhymes are adorable and learning-shapes songs are valuable. But with the state of things around us, social distancing and staying at home can provide a great opportunity for parents to expose their little ones to better music, some even with helpful life lessons.

We’ve compiled a list of some of our favorite kid-friendly albums from what we dub the “Golden Age of Rock,” the classic oldies of rock ‘n’ roll from the ’50s through the ’70s, to help create a fun music experience for you and your kids. So, clear the living room, turn off the TV and fire up the record player (or Spotify playlist) and, hopefully, get to dancing.

Chuck Berry defined the sound and spirit of rock ‘n roll, so it’s only right that our kids hear his music. This compilation album, which Rolling Stone ranked No. 21 on its 500 Greatest Albums of All Time, starts off with the toe-tapping “Maybellene,” and kids just know what to do when songs like this come on. Later on the album is “Johnny B Goode,” a fun opportunity for you to mention a great scene in Back to the Future when Marty McFly baffles everyone at a dance with a rendition of this hit. This album is a necessary lesson on the roots of rock ‘n’ roll. Nicknamed the “Father of Rock ‘N’ Roll,” Berry was a major influence on decades of music that followed him.

With lyrics that go “A-wop-bop-a-loo-lop a-lop-bam-boo,” “Tutti Frutti” is probably the most fun a kid will have singing to a song, and the second you drop a needle on this track, your toddler will light up. It’s the opening track on Little Richard’s 1957 debut album Here’s Little Richard, which also includes “Long Tall Sally (The Thing)” and “Slippin’ and Slidin’ (Peepin’ and Hidin’)” Simply put, these are just fun songs.

The Beatles helped define 20th-century rock ‘n’ roll, but not before dominating the pop charts. If we had told fans of the hit “I Want to Hold Your Hand” that the same band would later be making songs like “Helter Skelter,” they wouldn’t have believed us. But, there’s one album, in particular, that is a great introduction to the Beatles for kids, and has both the catchy, pop-like melodies that launched the Fab Four to stardom, but a little more meaningful message than the idea that they want to hold your hand. And it seemingly has no references to drugs yet: Rubber Soul. It’s said that Beatlemania ended on Dec. 3, 1965, the day the record hit the shelves. It was the album that saw the Beatles as men, not boys, similar to a teenager coming of age. And tracks like “Nowhere Man” explored John Lennon’s own dealings with inadequacy.

David Bowie is a great artist to introduce to kids early on because he took on many alter-egos, opening up the possibility of a young person to find one that relates to their own personality. His music explores fantasy-like storylines, and he always encouraged young people to be themselves –– no matter how weird. His 1971 album Hunky Dory is especially great for kids, and the song “Changes” reflects those ever-changing personas. He also wrote the track “Kooks” for his first son, which is a great song to dedicate to your own children.

We’re the last people to reduce the fantastic music of Wings to “just another Beatles band,” but once your child realizes that the Beatles broke up in the summer of ’69 and are left wanting more, they may want to hear what one Beatles head songwriter, Paul McCartney, made in the ’70s. Only two years after John, Paul, George, and Ringo parted ways, McCartney co-founded Wings with his wife. Yes, we’re recommending a “greatest hits” album, but it’s a great start for kids, or anyone, who hasn’t taken the time to listen to the band before. It’s a fun record that highlights the best of a great band.

This album is packed full of emotional ’70s folk-rock ballads. But track four, “Brand New Key,” recalls the innocent days of young love. A particularly adorable song from singer-songwriter Melanie, “Brand New Key” follows a young, empowered girl thriving off confidence and nudging a crush to play along as she roller skates along — and it’s super fun to dance to. The rest of the tracks are probably more fitting for a teenager, as it covers a lot of heartbreak, but it’s also a great introduction to blues-rock.

Another Side of Bob Dylan

Is your child an aspiring poet or songwriter? Look no further than Bob Dylan to inspire that creativity. And his fourth studio album, 1964’s Another Side of Bob Dylan, is a great introductory album for your little one. OK, this is a folk album, but Dylan has become an influential figure in rock ‘n’ roll. Like the album title suggests, this was the first album Dylan released that didn’t reflect his usual politically driven songwriting, making it easy listening for kiddo. In fact, it played on his humor quite a bit too. Give “All I Really Want to Do” and “I Shall Be Free No. 10” a listen with the kids around for a good laugh. “To Ramona,” though, shows Dylan at his best on this album. A beautiful, lullaby-like song, the melody alone is likely to capture your child’s attention.

It’s hard to decide which album is best for introducing your little one to when it comes to The Beach Boys. Endless Summer, a great album for those summer pool days in the backyard, captures the best of The Beach Boys’ 1963-1966 catalog. Be sure to pick up the vinyl reissue that includes “I Get Around,” “Surfin’ USA” and “California Girls.” These are all great introductory songs to surf rock and capture a great slice of the band’s career. You can almost feel the warm sun and sound of the hot rods driving by.

Pet Sounds is universally regarded as The Beach Boys’ best album. So, go ahead and save your kid the future embarrassment of admitting they haven’t heard this album by introducing it to them now. It begins with the super catchy tune “Wouldn’t It Be Nice,” which captures the thoughts we have when we’re lovesick teenagers. It’s been said that Beach Boy Brian Wilson was aiming for tracks that kids could relate to on this album, and we think he did a pretty good job.

Yeah, we’re recommending another greatest hits album. But look, this one cuts out some of the more experiential songs the band did (oh, you didn’t know about that?) We’re not going to recommend that you introduce your kids to The Monkees by having them watch the film Head, or listen to The Monkees’ soundtrack for it. Trust us. And, The Monkees didn’t have an endless catalog of amazing songs, but the hits they did have are upbeat, really fun, and definitely kid-friendly.

This double album (not to be confused with a greatest hits album) was partly taken from earlier writings from Bob Dylan. It contains Dylan originals in a pop-rock-friendly tone, including: “Mr. Tambourine Man,” “Chimes of Freedom,” “All I Really Want to Do” and more, so it’s a great opportunity to show your child how songs can be made differently.

Dusty Springfield was an anomaly among the usual British female pop stars of the 1960s. Her voice was deep and rich, and her music sounded not unlike the hits coming from Motown or Stax. Her singles include “I Only Want to Be With You,” “Wishin’ and Hopin'” and “Son of a Preacher Man.” The latter of which is on one of the singles from her best-rated albums, Dusty in Memphis. A hallmark of the oldies we so love to wax nostalgic, Springfield’s music is a great lesson in love, and perfect for any lovelorn preteen.

Buddy Holly was a pioneer in 1950s rock ‘n’ roll, with hits like “Peggy Sue” and “That’ll Be the Day.” His signature “hiccup,” unique spin on rockabilly and as-innocent-as-can-be songs make him perfect for introducing a young person to rock ‘n’ roll. After all, he’s said to have inspired greats like Beatles John Lennon and Paul McCartney. Unfortunately, he died shortly into his blossoming career, so his discography mainly includes compilations. But 20 Golden Greats: Buddy Holly Lives is listed on Rolling Stone‘s 500 Greatest Albums of All Time, and includes tracks he made with The Crickets — his band he played with before going solo.

Wanna be a better guitarist? Click this link to learn the secret!