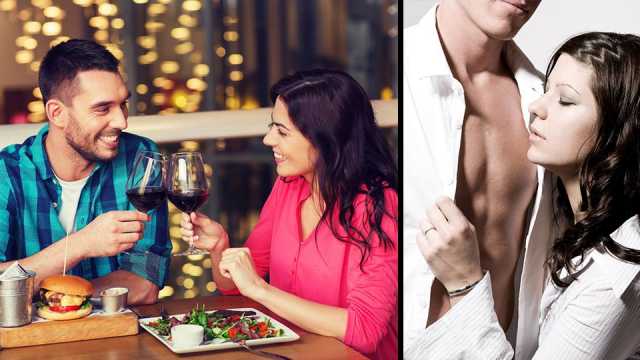 When it comes to finding a romantic partner, we often equate attraction with beauty. But beauty in itself is not the only thing that attracts us. Science tells us that beauty is just one part of the equation. It seems that true romantic attraction goes way beyond the surface and is more closely linked to our subconscious urges to procreate. Here are seven scientific reasons why you’re likely attracted to a special someone.

The sexiest person in the room may not necessarily be the most beautiful person with perfect asymmetric features and a great body. It’s actually the person who projects self-confidence. So, why is self-confidence so darn sexy? Well, according to research published in the Society for Personality and Social Psychology,  it’s hard to see certain traits — like aptitude, ambition, social status, and compassion — in a potential love interest at first glance. Therefore, since we believe people actually know themselves, we assume that their perceived confidence (or lack of confidence) reflects positive traits that we’re looking for in a partner.

But there’s a fine line between self-confidence and overconfidence. Researchers decided to look at the advantage overconfident individuals might have in the dating world. What they found was that overconfident people were not seen as more attractive, and may in fact come across as being arrogant, which diminishes the benefits of being confident.

If you share the same values, life experiences, age, and even similar levels of attractiveness, then there’s a good chance that special someone just might be your match. According to a study published in the Journal of Experimental Social Psychology, the adage suggesting opposites attract may not entirely be true. It seems that ongoing evidence finds that romantic couples often share strong similarities between ages, political and religious attitudes. However, they only share a moderate similarity in education, general intelligence, and values.

Interestingly, though, when it comes to personality, the similarities stop there. So, while you’re happy being the life of the party, your partner just might be happier hanging out at home watching a good movie. But that doesn’t mean you won’t find them attractive. According to another study published in the same journal, having similarities in physical attractiveness — meaning you’re both a ten or a two — also plays a role in the process of romantic attraction.

Your earliest relationships are formed with your mom or dad, so it makes sense that you might seek out partners that resemble your opposite or even same-sex parent. And it doesn’t stop with personality, suggests a study in the Journal of Human Behavior and Evolution. It may even include the same eye color and age, meaning that if you have younger parents, you might search for a younger partner.

But how can that be, you say, especially when you have such a poor relationship with mom or dad? Well, it all begins with the attachment theory, suggests Psychology Today. Apparently, the emotional bond that typically forms between a baby and primary caregiver is the gateway to influencing how you will connect to others as adults romantically and in other ways. It also creates a basis on how relationships work. So, if you’re hoping that he or she finds you attractive, look no further than his or her parents.

If you’re a man who shaves or waxes the hair from your chest area — stop! Research published in the Archives of Sexual Behavior suggests that women find both muscular or huskier men, who possess hair on their chest area, more attractive than those who bare it all. It seems that chest hair plays a role in sexual selection for women. On a subconscious level, women see men with chest hair visually healthier and possessing a physical prowess — both, apparently, good traits for mating.

They smell so good!

Ever notice how some people just smell amazing? They may not be wearing perfume or aftershave, but their skin smells fantastic. Well, it turns out you’re likely sniffing their pheromones. Pheromones are a scent-inducing chemical that secretes in sweat and other bodily fluids. According to Scientific American, all creatures great and small — including humans — send out these chemical signals to entice mates. Bettina Pause, a psychologist at Heinrich Heine University of Düsseldorf, says, “We’ve just started to understand that there is communication below the level of consciousness.”

Your brain wants what it can’t have

Why is it that so many of us are drawn to that forbidden fruit? A study published in the Journal of Experimental Social Psychology presented women with the same photograph of their potential dream man. Half of the women were told Mr. Right was single, while the other half were told he was in a relationship. Over 50 percent of the women were interested in pursuing a single guy. Interestingly, that figure jumped to 90 percent when they discovered he was already in a committed relationship. Yikes!

It could be that we are drawn to those we consider “out of our league” because we see them as the ideal model of ourselves. Maybe we develop these crushes to force ourselves to improve both physically and socially. Whatever the reason, keep a close eye on your guy!

Love at first sight linked to our primordial past

Apparently, we have inherited the brain circuitry for instant attraction or “love at first sight” because of our primordial past. Dr. Helen Fisher, a professor with the Department of Anthropology at Rutgers, told Match.com, “Like other mammals, our female forebears had a monthly period of heat.” And, like all mammals that have only a few hours, days, or weeks to mate, our ancestors had to become attracted quickly. So, the next time you find yourself head over heels in love at first sight, just chalk it up to your primal need to procreate.