Not sure if she’s showing you major signs of interest or just excessively friendly? How many of these flirting signs from a woman can you tick off? 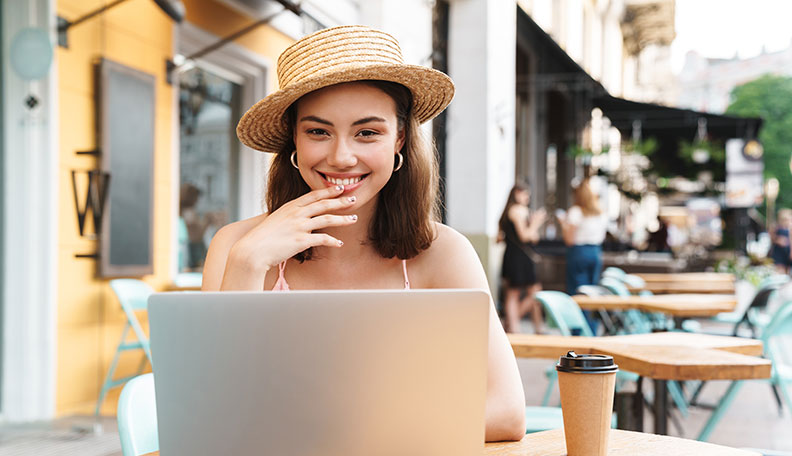 Here’s another post from one of my female readers. I thought it was worth sharing. Take it away, Prudence!

Women are not as obvious as men when it comes to flirting. Of course, that’s a huge generalization, but on the whole, you can’t always be sure of the flirting signs from a woman.

I am a woman, so I feel well equipped to give you the reason why. You see, we think men can read our minds. Of course, it’s obvious! Why shouldn’t you be able to tell exactly what we’re thinking?

But it’s not that obvious. It can be confused with friendliness, coyness, and sometimes, depending on the type of flirting, downright disdain!

Flirting signs from a woman to look out for

Perhaps we should be a little more obvious when it comes to whether or not we’re flirting or simply being friendly. But on the whole, there are some flirting signs from a woman you can look out for and help you decide whether or not you’re reading the situation correctly.

#1 She looks at you, then she looks away. Is there anything more confusing than someone who looks at you and then looks in another direction? I mean, do they mean to look at you? Was it a mistake? Are they disgusted? What’s going on?

However, a woman who looks at you and then looks away, and perhaps sneaks another glance, is probably flirting with you a little.

#2 Playing with her hair. The twirling of the hair around the finger move is as old as time, but also generally playing with her hair and fidgeting a little. If you see this accompanied with any of the other flirting signs from a woman, it’s a pretty hard signal towards flirtation city!

#3 She tilts her head towards you and looks interested. Okay, so she could be genuinely interested in what you’re saying, but if you notice this sign and it’s accompanied by any of the others, it’s likely to be flirtation. She wants to show you that she’s fascinated by what you have to say. She’s flattering you with her attention.

#5 She smiles in a coy way. Coyness means that she wants you to notice that she’s interested, but she’s not ready to go all out and show it clearly. She’s testing the waters and see if you pick up on the signs and reciprocate. It’s also likely that the coy smile move is accompanied by her looking at you and then turning away move. Classic!

#6 Biting or licking her lips. If she’s talking to you and looking at your lips or biting/licking her own lips, there is a very good chance that she’s flirting with you. She might be doing this on purpose or subconsciously. It’s a very flirtatious move. When you think about it, the lips are quite sexual, so she’s drawing attention to them and hoping that you show interest back. [Read:

#7 She angles her neck towards you. Again, this is likely to be a subconscious move, but the neck is a vulnerable part of the body. If she’s angling her neck in your direction, she’s actually flirting, especially if accompanied by any of the others on the list. If she’s biting or licking her lips when she’s doing this, well, she’s either a vampire or very interested!

#8 She playfully touches you. Light and playful touches are a great way to gauge someone’s interest in you. If she’s laughing and playfully nudges you, or you notice that she seems to be generally touching your shoulder or your arm and doesn’t do the same things to other people around her, it’s quite likely to be her flirting with you.

#9 She tries to find out if you have a partner. She might come right out and ask you. But if she’s inquiring about your relationship status, she’s flirting and trying to work out whether she can get in there instead! She might also ask your friends to find this information out. Of course, they’re also likely to tell you!

#10 She’s all over your social media. Are you new friends on Instagram or Facebook? Are you noticing that old photos are being ‘liked’ and she’s commenting or ‘liking’ your general posts a lot? This is a clear sign that she’s trying to figure you out and working her magic on you. When you notice any of the other signs alongside this one, it’s obviously flirtation with a capital F!

How many of these signs can you tick off? You might notice just one and still wonder whether or not she’s giving you signs. Of course, it’s best to say ‘yes to several signs before you come to a clear conclusion, but most of these are quite clear on their own too.

Most women won’t come right out and tell you that they like you. I wouldn’t. However, some will. If you have a girl around you who isn’t quite so forward, it’s down to you to try and figure out where you stand from the signs she’s giving you.

Some signs are obvious. Some are subtle. As I mentioned, she is likely to expect you to read her mind! So, work out how many of these signs are coming your way and figure out what you think about it.

What is your next move? If you like her back, show her some signs in return. Show her some attention and let her feel comfortable enough to really let down her guard. You might be lucky enough to have attracted a woman who really doesn’t mind letting you know that she’s interested. In that case, skip the flirtation and the ‘does she/doesn’t she.’ Simply figure out where you want to go.

The more likely scenario is that she’s going to make you do the work because she’s not entirely sure whether you’re flirting with her either!

Dating is confusing, and attraction before that part is even more of a mind-mess. We don’t want to come right out and say what we feel or think. We fear the other person will recoil in horror and run away. Of course, it’s unlikely, but it’s a risk we all take. Such is the joy of love and attraction!

If you’re not sure if a girl is looking your way with intent or simply glancing over your shoulder, look out for these flirting signs from a woman to figure out what she wants.