This is the final chapter of this series! Thanks so much for reading it and following me on this strange journey.

If you were like me in the 1970’s you listened to top 40 radio most of the time. You heard a lot of great songs and instant classics. But among them were many unforgettable songs that were just weird or strange. I’ve tried from memory to remember the ones that stand out in my mind.

For weird reasons they became hits. They either made no sense or having any musical merit. Just a bizarre era of story songs.

Of course, this stuff is all pretty subjective but I did have a few criteria for what should be here. I decided to include a song if it:

I’m not saying that there weren’t ANY good songs during the 70s but there was just a truck-load of waste back then. If anybody’s stupid enough to think that ALL disco sucks, remember that it’s just a bastard son of rhythm & blues just like rock’n’roll is- so they’re related, see? Also, the 1970s definitely didn’t have a monopoly on shitty music- there was tons of crap unleashed on us in the decade before and after and now also (there’s a future article there somewhere). Clothes-pin anyone?

The 70’s was an interesting time for music. There was a lot of experimentation and creativity from that decade, but there was also plenty of crap as well. Here is my list of the worst and most irritating songs of the 70’s.

The Night Chicago Died. A fictional shootout between members of Al Capone’s gang and police. Based on The Valentine’s Day Massacre between Capone’s men and Bugs Moran’s gang. Police weren’t involved, and no one died. There was never a showdown where 100 officers were killed. They also mention the East Side of Chicago, which isn’t really a thing. Just like the girl born and raised in South Detroit, in the Journey song Don’t Stop Believing’. But the guys in Paper Lace just figured there was an East Side to everywhere. It’s a catchy song, and well done, but it’s a strange song.

I think because of its anti-war sentiment, a lot of people thought this was about the Vietnam War. This song went to number 1 on the charts. I think it’s about the Civil War. Rolling Stone has voted it as one of the worst songs ever made. I remember hearing this song on the radio back then. One of the girls in my class sang along with it at an assembly at school one day. Her version was worse because she seemed to be terrified to be on stage in front of everyone, but the song is an odd choice.

Look at the ridiculous outfits on these guys. Mummer’s Parade much? Elvis called, he wants his wacky sequined jumpsuits back.

Was 1974 the year of weird songs? Helen Reddy already had two huge hits with I Am Woman and Delta Dawn. Written by Alan O’Day. Who knows why she did this song. This song is about a weird girl who gets kicked out of school who stays in her room and listens to the radio all day. Imagining boyfriends who come and visit and dance with her. One day a boy comes to visit her and gets absorbed into the music. Does he shrink? Does he disappear? Does Angie kill him? Does he become her forever lover? I guess we’ll never know because Helen Reddy never said and now she’s passed away.

Another awful outfit. I never realized how bad some of the 70s fashions were.

I always hated Leo Sayer. He reminded me of a skinny version of that workout guy, Richard Simmons. It was Leo’s first US top 10. He later had hits with, You Make Me Feel Like Dancin’ and When I Need You. The story in this song is, some guy wanders into a fantasy bar or magical pub, but before he can eat he has to dance like Fred Astaire. He doesn’t think he can dance at all, but he somehow figures it out and everything works out. I really couldn’t stand Leo Sayer in the ’70s. I had zero tolerance for anything that wasn’t guitar-driven rock back then. This performance just looks like old vaudeville to me. Complete with that barbershop banjo in the background. Watch his performance in this video. His choreography and him acting out the lyrics is ridiculous.

Back when I was in a band if someone told me I could only become famous if I did this act and this kind of music, I would have jumped into a tree shredder.

Cher was at the time on the hit TV show Sonny & Cher. I’m sure that was a great place for her to break any new material. I get why the LGBTQ community has always embraced Cher. Even though she’s an attractive lady, she always resembled a guy doing a drag act. Even her voice has the limited range of some dude singing songs in a bar in a dress doing karaoke on 13th street in Philly.

The dark lady in the title is a gypsy fortune teller in New Orleans. The protagonist of this song follows the fortune teller’s limousine back to her lair and gets her fortune told. She learns her lover has been unfaithful to her with as the gypsy tells her, someone who is very close to her. The dark lady tells her to leave and never return. But when she gets home she smells the very perfume that the gypsy had been wearing. So she sneaks back to the fortune teller’s shop with a gun and catches her lover with the gypsy. They’re laughing and kissing. She shoots them both killing them. Cher hit number 1 with Dark Lady and she wouldn’t have another number 1 until 25 years later, with Believe.

It’s a crazy story song, which was popular in the 70s.

It feels like a statement about God and country and how man kills in the name of religion and for whatever else.

Go ahead and hate your neighbor, go ahead and kill/cheat your friend all in the name of heaven you can justify it in the end.

The Night The Lights Went Out in Georgia –  Vicky Lawrence- 1974

Bobby Russell was a grammy-winning songwriter who wrote songs for Frank Sinatra and Elvis. When he wrote this next song,  he disliked it so much he didn’t even want to cut a demo. His wife, Vicky Lawrence who was a cast member on The Carol Burnett Show thought it was a hit. But after Liza Minnelli and Cher both turned it down, Vicky decided to record it. I’m not even going to get into the details of this complicated ridiculous plot, but let’s just say that the narrator accidentally frames her own brother for murder and gets him hanged, while killing two people herself and hiding the bodies, but the whole time she blames the crooked criminal justice system for her brother’s death.

It makes no sense. But it was a number 1 hit. It was later recorded by Reba MacIntyre and Tanya Tucker, and was even turned into a feature film starring Kristy McNicol! She won two Emmy Awards for her portrayal of teenage daughter Letitia “Buddy” Lawrence in the TV drama Family.

Insane! All of this and a pre-Star Wars Mark Hamill too! 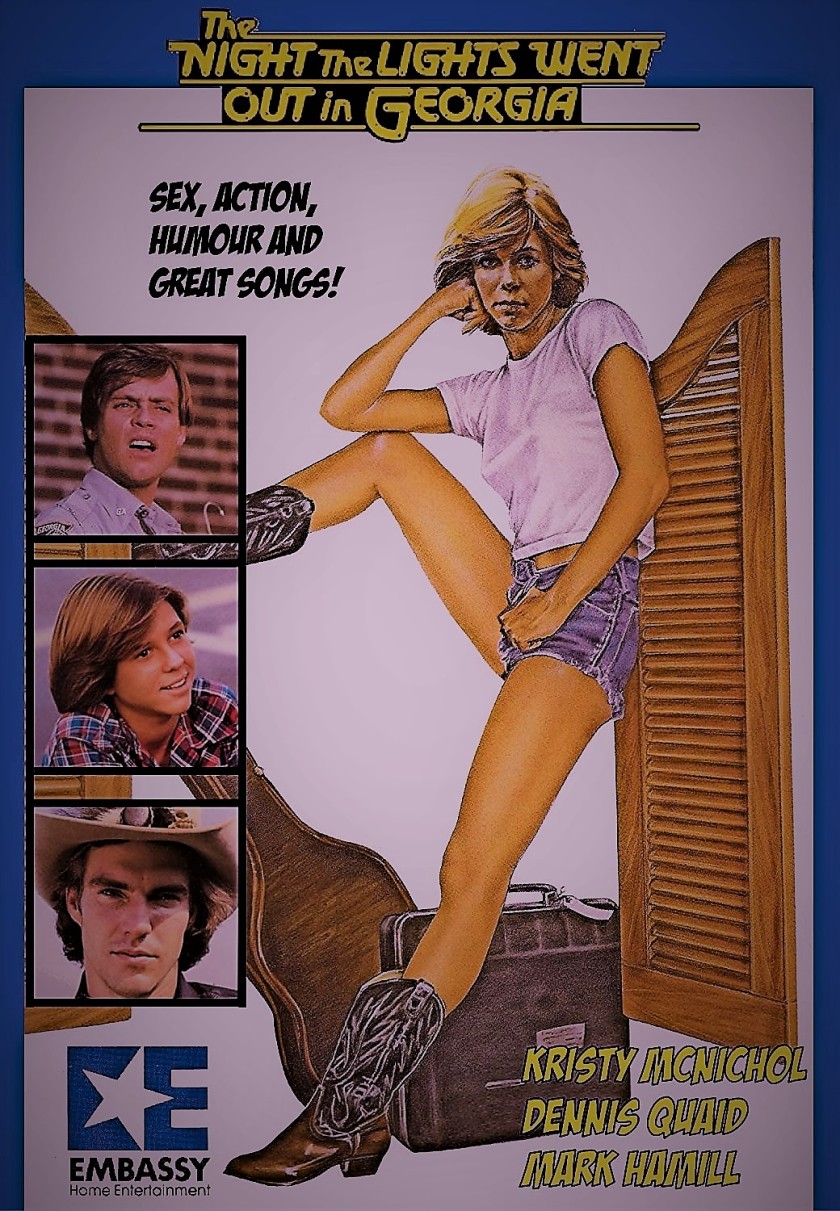 is a popular song written by Gerry Goffin and Carole King. It was first recorded by Bobby Vee for Liberty Records on March 28, 1962. The lyrics consist of a young man asking a young attractive woman to stay away from him so that he will not be tempted to betray his steady girlfriend by kissing her. The song is notable for making the American Top 20 three times: for Steve Lawrence in 1963 (US number 1), for The Happenings in 1966 (US number 12), and for Donny Osmond in 1971 (US number 1). It is also the first song, and one of only nine, to reach US number 1 by two different artists.

The song almost didn’t get recorded, because according to the Mormon laws, one had to be 16 for double dating and 18 to date alone, however, as long as this was an innocent song, the Mormon faith allowed the song to be sung and recorded. Donny was 13 at the time the song was recorded. Listen to that voice. Is our Donny a little late getting to puberty?

Say hello to white bread America’s version of Michael Jackson and the Jackson 5. Michael had sass, talent, and pipes. Donny is a little, strained, shrill, knock-off of the obvious King of Pop.

I hope you enjoyed this series. I had fun compiling this stuff and writing about it. Maybe I should do the worst films of the 70s next!

Just want to say Hi to my sister Gail, for reading and listening to this whole series!