If you were like me in the 1970’s you listened to top 40 radio most of the time. You heard a lot of great songs and instant classics. But among them were many unforgettable songs that were just weird or strange. I’ve tried from memory to remember the ones that stand out in my mind.

For weird reasons they became hits. They either made no sense or having any musical merit. Just a bizarre era of story songs.

Of course, this stuff is all pretty subjective but I did have a few criteria for what should be here. I decided to include a song if it:

I’m not saying that there weren’t ANY good songs during the 70s but there was just a truck-load of waste back then. If anybody’s stupid enough to think that ALL disco sucks, remember that it’s just a bastard son of rhythm & blues just like rock’n’roll is- so they’re related, see? Also, the 1970’s definitely didn’t have a monopoly on shitty music- there was tons of crap unleashed on us in the decade before and after and now also (there’s a future article there somewhere). Clothes-pin anyone?

The 70’s was an interesting time for music. There was a lot of experimentation and creativity from that decade, but there was also plenty of crap as well. Here is my list of the worst and most irritating songs of the 70’s.

This song was written by John D. Loudermilk. It was first recorded by Marvin Rainwater in 1959 and released on MGM as “The Pale Faced Indian”, but that release went unnoticed. The first hit version was a 1968 recording by Don Fardon – a former member of the Sorrows – that reached number 20 on the Hot 100 in 1968 and number 3 on the UK Singles Chart in 1970.

In 1971, the Raiders recorded “Indian Reservation” on the Columbia Records label, and it topped the Hot 100 on July 24. On June 30, 1971, the RIAA gold-certified the record for selling over a million copies. The record was later certified platinum for selling an additional million copies. The song was the group’s only Hot 100 number 1 hit and their final Hot 100 top 20 song.

At the end, where the Raiders sing “…Cherokee nation will return”, Fardon says “Cherokee Indian…”, while the line is absent in Rainwater’s version, which ends with “beads…nowadays made in Japan.” In addition, Fardon sings the line: “Brick built houses by the score/ No more tepees anymore”, not used in the Raiders’ version.

Cherokee people have never lived in tipis, nor do they use the term “papoose”. These are stereotypes and misconceptions, with the reservations and tipi assumptions usually based on Hollywood portrayals of Plains Indians. However, the Cherokee are a Southeastern Woodlands Indigenous culture.

Not a terrible song, just a bit insensitive by today’s standards, but worth adding to this list of 70s oddities.

“TSOP (The Sound of Philadelphia)” is a 1974 hit recording by MFSB featuring vocals by The Three Degrees. A classic example of the Philadelphia soul genre, it was written by Gamble and Huff as the theme for the American musical television program Soul Train, which specialized in African American musical performers. The single was released on the Philadelphia International Records label. It was the first television theme song to reach number one on the Billboard Hot 100, and it is arguably the first disco song to reach that position.

The song is essentially an instrumental piece, featuring a lush blend of string instrument and horn section in the Philadelphia soul style. There are only two vocal parts to the song: a passage close to the beginning during which The Three Degrees sing “People all over the world!”; and the chorus over the fadeout, “Let’s get it on/It’s time to get down”. The words “People all over the world!” are not heard in the original version. The version heard on Soul Train also had the series title sung over the first four notes of the melody, “Soul Train, Soul Train”. This particular version was released on a 1975 Three Degrees album, International.

“TSOP” hit number one on the U.S. Billboard Hot 100 in the spring of 1974 and remained there for two weeks, the first television theme song to do so in the history of that chart. It also topped the American Hot R&B/Hip-Hop Songs (for one week) and adult contemporary (for two weeks).  The Three Degrees would revisit the top of the AC chart later in 1974 with their hit single, “When Will I See You Again”.

Don Cornelius, the creator, and host of Soul Train refused to allow any references to the name of the television series when the single was released, leading Gamble and Huff to adopt the alternate title for the release. Cornelius would later admit that not allowing the single to be named Soul Train was a major mistake on his part. (As a result, the Three Degrees’ singing of the show’s name “Soul Train” during the chorus as heard on the TV version is not heard on the single.)

Although it was rerecorded a number of times for future versions of the show, and various different themes were used during the late 1970s and early 1980s, “TSOP” returned in the late 1980s and remained the theme song for Soul Train through the disco, 1980s rhythm and blues, new jack swing, hip hop music, and neo-soul eras of black music.

Not a bad song. Actually kind of a great disco song. I always hated disco in the 70’s because I felt it undermined rock music. But in reality, it’s simply R&B and Soul music jazzed up so you can dance to it. A huge fad in the late 70’s.

is a song by German disco group Silver Convention from their debut studio album Save Me (1975). Sylvester Levay and Stephan Prager wrote the song, and the latter produced it. “Fly, Robin, Fly” was released as the third single from Save Me in September 1975, peaking at number one on the United States Billboard Hot 100. Thanks to the success of “Fly, Robin, Fly”, Silver Convention became the first German act to have a number one song on the American music charts. The song received a Grammy Award for Best R&B Instrumental Performance in 1976.

“Fly, Robin, Fly” carries the distinction of being a Billboard chart-topper with only six words: the chorus simply repeats “Fly, Robin, fly” three times, with an ending of “Up, up to the sky“. During a segment on VH1’s 100 Greatest Dance Songs, it was revealed that the original working title was “Run, Rabbit, Run”.

It’s a classic disco tune that was wildly popular. But the reason it makes this list is that the only lyrics in the song are, “Fly Robin Fly, up, up to the sky.”

Jacqueline Nemorin (known professionally as Jackie Carter and Né-Mo-Rin) is a Mauritian-British singer, songwriter, composer, and music producer. She is notable for being one of the voices and members of the 1970s Silver Convention project. She’s the main girl in the middle and clearly the prettiest of the three. For me, it’s worth watching just to see her beauty.

The odd thing about this performance is; the choreography resembles some sort of aerobic workout!

It’s hard to hate on a song about the joys of mid-day sex, but the Starland Vocal Band makes it easy. The group was composed of two real-life couples that probably enjoyed some afternoon delights around the time of the song’s release in 1976, though both couples have long-since divorced. The song hit Number One in the summer of 1976 and actually got the group a brief variety series on CBS the next year. They also won a Grammy for Best New Artist – as opposed to, say, Aerosmith, the Ramones or Tom Petty, and the Heartbreakers or the many other great bands that were around that year. The song got renewed attention when it was featured on Glee recently with guest star John Stamos.

It’s an awful song with horrible lyrics. That whole bit about rubbing sticks and stones together just makes me retch.

Rick Dees was a Memphis DJ who spun so many disco songs that he decided to record his own parody of the genre in 1976. He never imagined that “Disco Duck” would reach Number One on the Hot 100 and briefly make him a household name. The song was a hit everywhere in America besides Memphis, whose radio stations didn’t want to promote a rival – and Rick’s own station refused to play it. He continued to release novelty songs in the late 1970s and early 1980s, but they failed to find an audience. Then Weird Al came around with “Eat It” and Dees just couldn’t compete. Weird Al wasn’t going to keep Rick Dees down though. He started the Rick Dees Weekly Top 40 in 1983 and it’s still going strong.

This song and this performance are downright awful!

“Good Girls Don’t” begins with Fieger playing the harmonica, in a part which authors Michael Uslan and Bruce Solomon liken to The Beatles‘ song “I Should Have Known Better.” The lyrics, such as the refrain “She’ll be telling you ‘good girls don’t but I do,'” were considered misogynistic by some critics. However, Joyce Canaan of the Centre for Contemporary Cultural Studies wrote that this line succinctly captures the transformation of teenage girls’ representations of their sexual practices; while they want to be seen as “good girls”, even good girls may engage in practices not corresponding to established moral standards. Fieger has stated that “All we were doing in songs like the naughty ‘Good Girls Don’t’ was reflecting the way 14-year-old boys feel. And there’s a little 14-year-old boy in all of us. I think that’s why the record did so well.” Other lyrics that created controversy included the lines:

“And she makes you want to scream; wishing you could get inside her pants” (this line was re-recorded as “wishing she was givin’ you a chance” on the “clean” single release), and:

“And it’s a teenage sadness everyone has got to taste.”
“An in-between age madness that you know you can’t erase till she’s sitting on your face (and it hurts!).”
DISGUSTING!
Although I really liked My Sharona when it came out, I realized quickly that Doug Fieger seemed like a Beatles wannabe and a bit of a pervert. Who names their album, “…But The Little Girls Understand.”??? What kind of Pedos are these guys to approve that? Even the cover’s imagery conveys that. A young girl looking up at the stage in awe. It’s awful. Even when this came out, I was 17 and found this offensive. 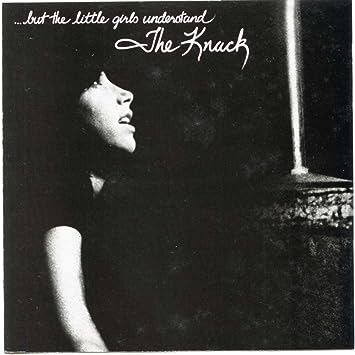 I don’t know. Here’s another one that makes me think of the Paul Anka song, You’re having my baby. Billy’s a good singer, but again, the subject matter bothers me. I just can’t ever imagine myself driving down the road in my car singing along to these lyrics. Just…NO.

Take my hand while we walk slowly to the room
Can’t you see tonight I’m gonna make sweet, sweet love to you?

Here’s a last-minute entry. One of my followers sent this one to me. I’ve never heard this song before. It’s a perfect addition to this series. I’m not going to give away the twist to this song.

Just listen to it.