Not that easy right?

When we were kids, we had toys. We all had plenty of toys. But we also liked to build things. We had access to our father’s toolboxes. If you could get your hands on a hammer and some nails, you could build something.

We’d find bits of wood in the trash and back the lot at the end of our street. We’d cut them with saws and nail them together to make little boats. They were only about a foot long in length.

Mine was made out of bits of old paneling that I cut and stacked to make the hull, and some smaller pieces to make a little cabin on top. I even nailed a little plastic army man to the deck. Every boat needs a captain!

My friend Michael made something similar but he attached a piece of styrofoam to the bottom of the hull of his boat. This made his ship what he described as “unsinkable.” Genius!

Designing and building boats in my basement was only the beginning of the fun. You came up with your own ideas and made it up as you went along. Gluing or nailing whatever you could find to make a little boat that you hoped would float. The cool thing was, we had these two big old washtubs in the front of our basement next to the washer. I’m assuming they were there to clean clothes maybe before people had washing machines?

We would fill them with water and place our finished works into the water to see if they’d float. If things looked weird or didn’t seem buoyant enough, we’d make the necessary modifications to our ships until they did.

We weren’t sitting in front of a television set. There was no such thing as video games. They weren’t invented yet. We built things with our hands. Created our own little toys and then engineered them to float. We had both read that it didn’t matter what the boat weighed, as long as it weighed less than the space it filled in any given body of water. Then it would float. It’s just science. Yea, we were a sharp couple of little boys!

We’d take our boats back the lot and across the railroad tracks into Cheltenham. We’d cross the ball fields and head off into the woods.

That led us down to Tookany Creek. We walked north along the footpath. We wanted to get as far upstream as we could so that once we launched our boats we could follow them all the way down the creek. We decided that we’d see how far and how long they would last on the journey down the “river.”

There was a footbridge that went across the creek, and we figured we’d release them just above there. It was probably the best place to start because the water was calm and we could see how they did before the creek really got going.

We’d place our boats in the water and off they’d go. We walked along the path and watch them float downstream. Normally, that would be the experience. Build the boats, launch them into a body of water, and watch them do what boats do.

But we were young boys. We crave action and adventure. To let these boats just float along was boring. How do we remedy this situation? We could just continue talking, laughing, and walking along the path to see where they went. Or, we could throw rocks at them to make it like a sea battle.

We didn’t go crazy and try to destroy them, but we simply pelted them so it appeared that our ships were under siege. Now we had a show!

The idea to throw rocks at the boats didn’t come from enjoying the notion of destroying things. Sometimes the boats would get stuck on big stones or broken branches in the water. So we sort of had to free our boats with what limited tools we had on hand.

But after a while, it was just fun to bomb the hell out of them. They were pretty sturdy and we knew they could withstand a beating. It’s not like these were expensive, elegant ships gifted to us by our parents. They were manufactured out of bits of trash. If they got destroyed, we’d have the opportunity to make more.

We were always taught to take care of our toys and put them away when we were finished playing with them. But we made these toys out of junk. If we chose to massacre our boats, by god we were going to do it.

But all the while we’re laughing and talking. Sometimes singing songs we knew from the radio. Light my Fire, Hotel California, or American Pie. I think the favorite song I would always hear Michael sing was Michael Row Your Boat. I wasn’t familiar with the song, but he would sometimes just hum it. Or sing it to himself when he was working on something.

A pair of lone warriors separated briefly from our tribe, out on an explore. Walking along the path by the creek under the canopy of trees in the forest. The golden rays of sunshine shone down through the foliage. Breathing in the fresh air. Hearing the birds chirp and woodland creatures scurry about as the creek bubbled and sang along with our joy.

By tossing rocks at our boats we were improving our hand and eye coordination. This was a solid activity for a couple of boys on a warm afternoon. You don’t realize it at the time, but you’re exactly where you’re supposed to be in the world.

We’d follow them along the creek and toss rocks at them occasionally for thrills or to free them from a snag. It was a fun way to spend the day. Life was slower back then. There’s something to be said about time running slowly when you’re a kid. Everything takes forever when you’re young. You’re always so impatient and waiting for things to happen. Waiting for Halloween, Christmas, or the last day of school to come.

Don’t you wish you appreciated how slowly time moved when you were a child now? Wouldn’t you like those sort of pleasurable moments in your adult life now to move at a slower pace? I think we all would as we watch the years roll by with great rapidity as we age. These simple childhood memories are to be cherished. To be wrapped up in our memories forever. Because that’s all we have. You could lose everything you own, and any memories you have from your youth still belong to you forever. You can’t say that about many things in our lives now. Even we are on a finite run on this planet. But I hope that by writing these stories they can live beyond my existence on the internet and in my books forever. Because tomorrow belongs to our sons and daughters, and their kids. Tomorrow’s a place for them. Sadly, it’s a place we can never go.

The best part of watching your boats float down the creek was knowing what was coming a bit farther “downriver.” After the rapids and much air fire from us, the creek would become calm. There was a section about 50 feet long that was like green glass. Just the occasional splash from a minnow or an insect.

Beyond the calm was the waterfall. It was the only place where you could see a waterfall. But it wasn’t like the traditional kind where it’s massive and dangerous. It was only about three feet high. But, it would still be a formidable opponent to a couple of little wooden boats.

We’d wait in anticipation to see what was going to happen next. We’d stake out the best spot to watch our boats go over the falls. Would they be destroyed in the pounding brine? Would they vanish forever beneath the waves into the abyss? These were all pressing questions running through our young minds.

There would be that moment just before they went over and we’d yell and shout with delight. “Here we go!”

The boats would tumble over the falls and what would happen was anybody’s guess. The boats would roll around at the bottom where the falling water struck the creek. We would be sure at this point we’d never see our little ships again. But somehow they would suddenly pop back up and right themselves. We would cheer as if we somehow had a part in their survival!

We followed them further down the creek. Under the Levick Street bridge and beyond.

We had gone so far that we didn’t realize that we had somehow stumbled upon the base of the Melrose Country Club. We were all the way down by the creek bank, but we could see the giant hills covered with the fine green grass of the golf course. We had only seen it in the winter when it was covered in snow, but we knew where we were. 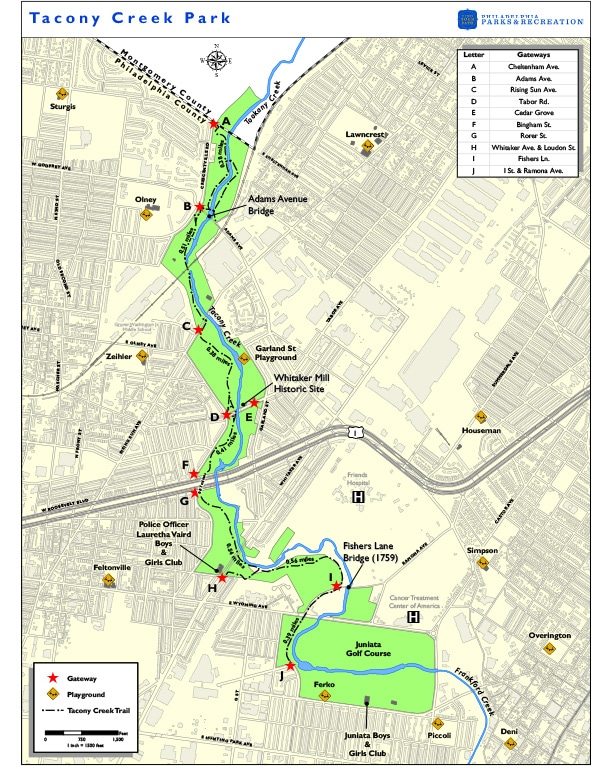 We could see our boats had come to rest on the bank. We were about to climb down retrieve them when a security guard rolled up on a golf cart. He asked us what we were doing there, and we told him our toy boats had drifted all the way down there. He told us we were trespassing on private property and that we had to leave.

“Can we just get our boats?”

“No. This is private property and you’re both trespassing and you’re going to get in a lot of trouble if you don’t get out of here now.”

So we turned and walked away, north of the golf course. When we got to Levick Street we trudged up the steep hill and made it to the top. We weren’t happy about what had happened and didn’t think we’d done anything wrong. We didn’t go to Melrose with the intention of trespassing or destroying property or anything. We just stumbled upon it. It just didn’t seem fair. This was a sad ending to what began as a fun-filled day of adventure.

Our boats weren’t lost to the creek. We had been banished!

We followed Hasbrook Avenue back to our neighborhood.

As we approached Michael’s house, we saw his father was outside mowing the lawn. Mike immediately told him what had happened. Jim Mitchell Sr. listened intently as Mike and I explained our plight. He nodded as he put on his mirrored aviator sunglasses.

“Let’s take a little ride in the car, boys.”

Within minutes, we pulled up to the edge of the country club. Mr. Mitchell stepped from the car with us following him not far behind.

The same guard rolled up on his golf cart and stopped us.

I watched as his face suddenly changed from authority to apprehension as Micheal’s father approached him.

Mr. Mitchell was a Police Officer with the Philadelphia Highway Patrol. He was not a man to be trifled with.

“Let them get their boats.”

The guard looked down at the ground and back again. He then sheepishly waved us on never taking his eyes from the officer in his presence.

Even I felt the man’s fear.

We scampered down the hill and retrieved our little boats from the creek bank. We didn’t even see the security guard on the way back to the car.

It had been quite a day.

When all else fails. Go get your father. He’ll know what to do. He’s a grown-up.

But it helps if your dad’s a cop.