“The greatest, and most beloved bar band ever.”

The family had been moved to our house in North Wildwood in the summer of 1979. My sister Janice had graduated from Frankford High in Philly and was off to college in the fall. The rest of us enjoyed the summer and I was enrolled in Wildwood High for my senior year. I could write a whole blog about that painful transition, but that’s not what this piece is about.

You can read about that here:

In the Spring of 1980, I was walking to school with my best friend Wolfie. We called him that because of the way he combed his hair back, the drummer in our band said he looked like Lon Chaney Jr. as the Wolfman. Wolfie was the lead guitarist and an accomplished player. But more than that he was an enduring friend.

We were walking to school, I think it was June. We were down on Pacific Avenue and one morning we saw this guy. He was on the other side of the street and looked like a scruffy skinny rock star. But it was 8 am in the morning. We were on our way to school and he was coming home from who knows where.

So I decided to yell over to him. “Hey, Steven Tyler!”

We had no idea who he was or what the dead end kids meant. We would occasionally see him on our way to school.

One night early that summer my sister Janice had come home from a night out with her friend Louise. She was a year older than me and the drinking age back then was 18 in Jersey. (I know, right?) They loved going out in the late ’70s to dance in the clubs. Disco was all the rage back then. (Much to my chagrin)

“How was your night out? Where did you guys go? I know the Fairview’s your favorite.”

“Yea, we went to the Fairview but didn’t stick around. They changed the place. There’s some punky band playing there now, so we have to find some other place to dance.”

Yea… she described them as punky.

So one night later that week, my friend Wolfie and I decided to check out the scene on Pacific avenue. The street had nightclubs and bars on every corner. We were in a band so we liked to check out other bands that were playing in the bars on the strip. Oh, Wolfie was 15 or 16 years old and I was 17 going on 18. We both carried fake ID’s but Wolfie rarely got carded because he looked older than me.

The London Ale House was a nice place to have lunch or dinner. It was the first bar/restaurant on the strip around Poplar avenue. The best band on the island played there at night. I guess they would clear out the tables and make space for the folks to come in and watch the band. That band was called Witness. All great musicians. I remember the singer was Billy Spence, a great singer, and showman. The other personality that stands out in my memory was the lead guitarist, Steelman. Everybody loved Witness because they played, Springsteen, Billy Joel, and Jethro Tull among other popular hits of the day. They were a spectacular cover band that was so good, they actually expanded the London Ale House to accommodate the crowds that would come to see them each night. They not only played great but put on an amazing show that was funny as well as entertaining, performing spot-on renditions of many great hits in the top 40. They would go to Florida in the winter and play down there and then come back every summer to jam in Wildwood.

But we were looking for something new. We headed downtown on that warm summer night. The street is alive with all of the sights and sounds of a typical evening at the shore. We came upon the Fairview and decided to check out the ‘punky’ band my sister had mentioned. The smell of stale beer and cigarettes hangs in the air. But something is definitely happening here. Something new.

I can’t find any good pictures online so you’ll have to settle for this sorry-looking photo. 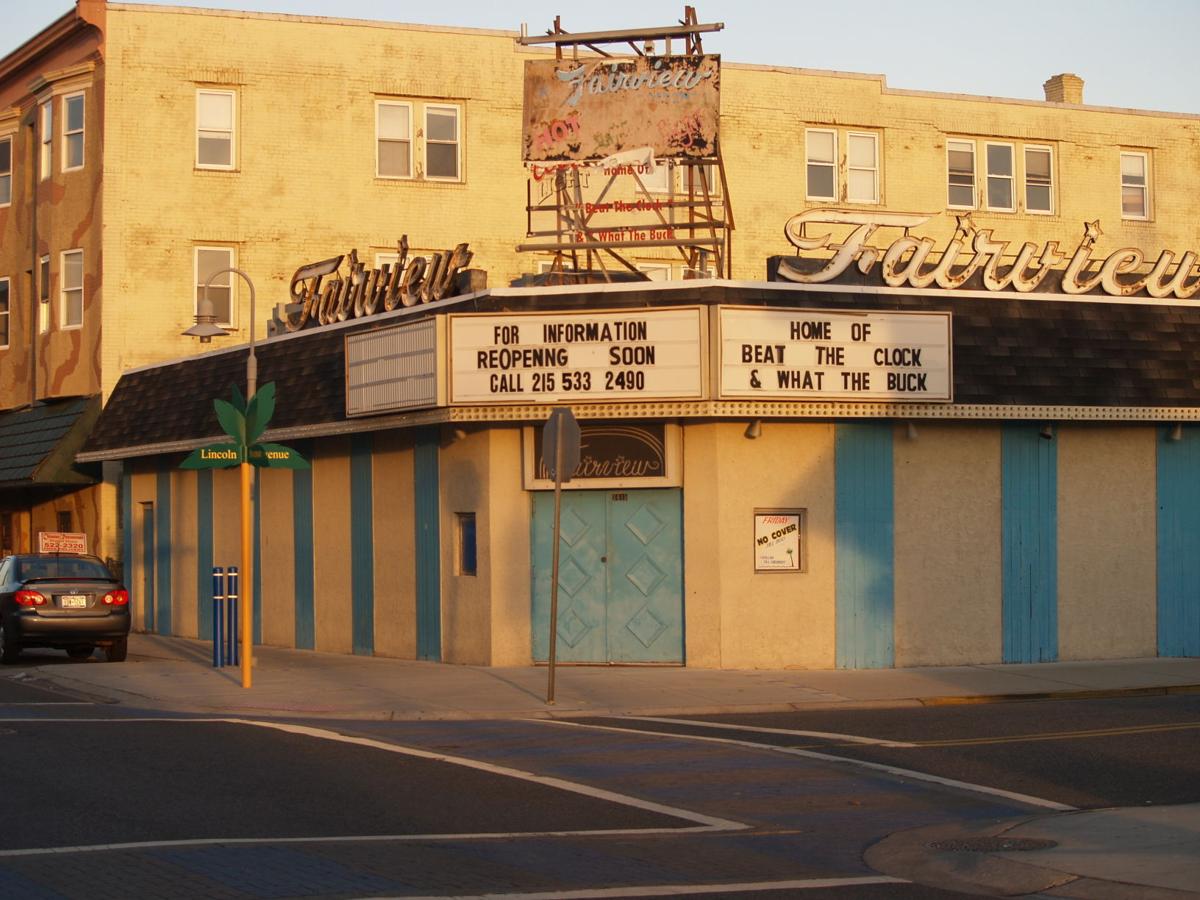 Wait! Just found this one from an old photo album I was looking through!

We get inside and it’s going. It was still early so the place wasn’t packed yet. The band is rocking out on stage. The Dead End Kids.

Let me attempt to describe what was happening. First of all, Wolfie and I are in a band. We rock out, but we’re in high school. We’ve played some gigs and we’re a good band.

But these guys are rockstars. I don’t use that word lightly. People describe people doing their job at work or some other dumb shit as being a rockstar. Aerosmith, Led Zeppelin, Van Halen, The Rolling Stones. They’re rockstars. Kelly James and George Rumbol of the Dead End Kids are Rockstars.

They play ferocious rough house rock, with all the spit, sweat, and attitude of the greats. They’re playing on this stage tonight as if their lives depend on it. Sure the singer, the bass player, and the drummer are all fine musicians, but Kelly and George ARE The Dead End Kids. They are living this life. I can see it. I can feel it in the first few minutes of seeing them play live. I want you to understand what I’m seeing and hearing. They rock hard and wear cool outfits, and look like they’re already at the next level.

The band Cinderella stole their act. The Dead End Kids were Motley Crue… before there was a Motley Crue.

There is nothing like this anywhere. They’ve replaced their guitar straps with seat belts from old cars. Why? Because the material is durable and slick. Why would you want that? So you can flip your guitar around your body. Literally fling it from the headstock so that it spins around your body and then you catch it, and keep playing. Original and incredible showmanship. I had never seen anything like it.

They played Wasted by a band no one had even heard of yet. That band had one record out. That band was called Def Leppard. They played Midnight Moses by the Alex Harvey Band. I had never heard of it before. It was spectacular. The band Dead Daisies does the song justice now.

The Dead End Kids are burning down the stage. George puts on a Bowie show that is so good, if you closed your eyes, it was as if David himself was there playing with some kick-ass hard rock band. heir version of Moonage Daydream better than Bowie’s! I’ve never seen anything like it. We’re a couple of teenagers. These are men. Men who make kick-ass rock and roll. Shit kickin’ hard rock.

I had the opportunity to chat with Kelly at the bar one night. I told him about our band and how I was focusing my energy on writing original songs. Kelly advised me that I was on the right path. “Keep writing your originals, man. That’s what’ll set you apart from other bands. Sure, you gotta play the covers to get paid, but the real future is in original songs.”

Seeing the Dead End Kids play on a regular basis was like going to church for me as a young musician. I loved them and everything they did. It solidified the idea that I needed to go to California and try to become like them.

One night I was down front with Wolfie and we were rocking out to the kings. We were both half in the bag from pounding dollar Miller beers. These two older hot girls came up to us and started hanging with us. One was blonde and the other had raven hair. We asked them their names.

“Do you girls turn back into horses at dawn?”

We totally made out with them that night. Kelly looked on from the stage nodding with approval.

We went to see them all summer long at the Fairview, and at The Hurricane East in 1981. Those were unforgettable times. I’ll never forget those guys.

Years later, when I was married in the 1990’s I saw Kelly and George playing in a small bar in Westville, NJ as the Dead End Kids. I went to see them that night wearing my old Dead End Kids T-Shirt. I brought my guitar and they even let me come on stage and play one song with them.

Some wonderful wishes are actually granted.

I will always love The Dead End Kids and those incredible summers in Wildwood growing up. It was a perfect life. None of us even probably realized that we were living the very best times of our young lives. Summer days filled with fun in the sun and surf, but the nights were reserved for Things that go Rock in the Night.

Thank you, gentleman. Thank you for the joy you brought to me and to so many other people during that magical window of time that only opens once… but closes forever.

Here are some videos I found online. Enjoy!

Well, folks, I hate to be the one to deliver the bad news but the Neurosurgeon just informed Kelly James that it is indeed cancer and is spread throughout his entire body including his bones….started as lung cancer and spread…They may discharge him Monday…Chemo is the plan for him. Please continue to pray for a miracle… Kelly is of course a much-beloved guitarist from the legendary band “Dead End Kids“. Please send your prayers, and love out to Kelly, as well as his original band members Bill Mattson and Georgie Rumbol

Join The Group Here: Kelly James We Love You
Kelly James is battling aggressive cancer throughout his body. Please join the group, and tell Kelly how much he’s loved, and respected. Kelly needs our support. Kelly is of course a much-beloved guitarist from the legendary band “Dead End Kids”

*This was a post that Kelly’s good friend Shawn Cahill (Lickey Rifferson) posted….

My new book, Angel with a Broken Wing is now for sale on Amazon!