Despite it being the easiest time in history for men and women to connect through social media, dating apps, and relationship websites, Americans are having less sex. This is especially true for men, who are experiencing an alarming drought when it comes to sex. Guys, what is going on? 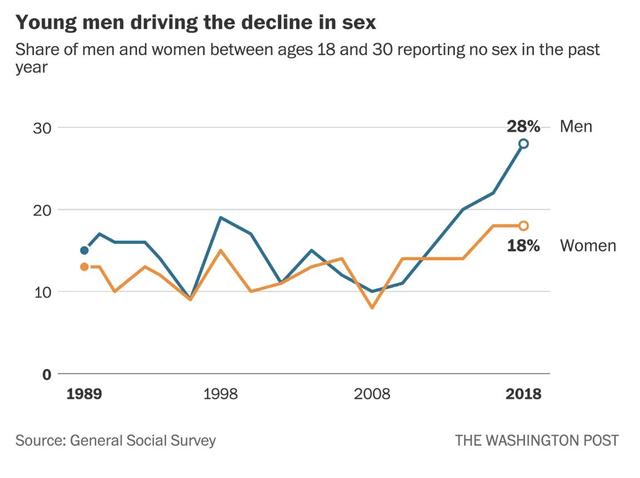 Stunning chart: the share of men under 30 who aren’t having sex has nearly tripled in the past decade https://www.washingtonpost.com/business/2019/03/29/share-americans-not-having-sex-has-reached-record-high/?utm_term=.50d764f2c767 …

The number of male virgins has exploded in the past decade, skyrocketing from eight percent in 2008 to 27 percent in 2018. 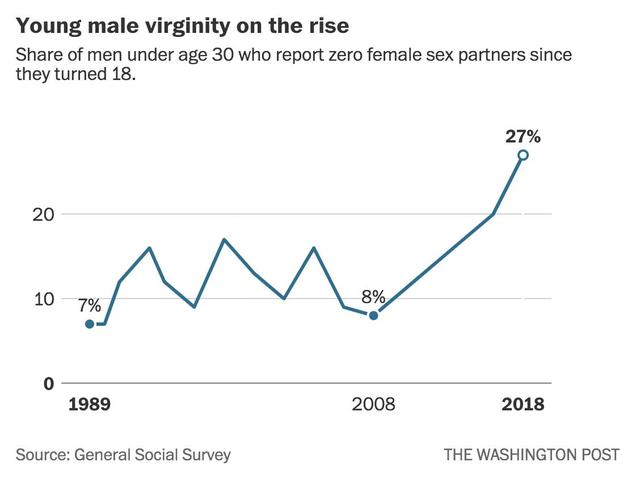 Final datapoint: the share of young men reporting no female sex partners since they turned 18 — a rough a proxy for virginity — more than tripled since 2008. I say rough proxy bc 1) some had sex in their teens and 2) some exclusively have male partners.

This eye-opening data comes from the General Social Survey, “biennial, nationally representative survey that has been conducted by NORC at the University of Chicago since 1972 to monitor societal change and study the growing complexity of American society.” 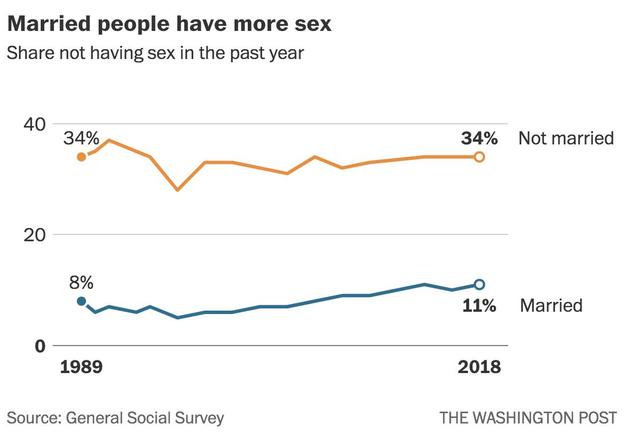 I see a lot of jokes along these lines BUT: married people are way more likely to have sex. For instance only 11 percent of the married didn’t have sex last year, compared to 34 percent of the unmarried https://twitter.com/elverkonge/status/1111610419200827393 …

Older Gen Z members and millennials are being-outf*cked by every other age group under 60-years-old and it’s not even close. 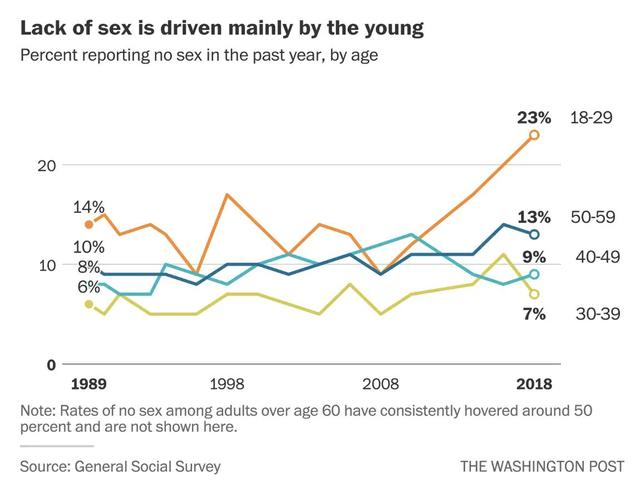 Oh also: 18-30 year olds are nearly *twice* as likely to report past-year celibacy as 50-somethings, which is frankly amazing https://www.washingtonpost.com/business/2019/03/29/share-americans-not-having-sex-has-reached-record-high/?utm_term=.9a0df62d8d52 …

Overall, there were 23 percent of American adults who were celibate in 2018. A good deal of that lack of the old in-and-out was due to the increase of the 60+ population from 18 percent in 1996 to 26 percent in 2018. About 50 percent of old folks don’t engage in sexual intercourse.

Those numbers are helping drive a big shift in American sex-having habits: the number not getting laid is at a record high. Conversely, the number reporting sex weekly or more is on the decline. https://www.washingtonpost.com/business/2019/03/29/share-americans-not-having-sex-has-reached-record-high/?utm_term=.50d764f2c767 …

So what’s up with this worrying dry spell? Incels? Is it the Mee Too movement? Is it Post-Trump Traumatic Sex Disorder? Access to spank movies at any times and anywhere?

By combining what we know about the contribution of different brain regions in behavior, and the endocannabinoid system upon them, support for the sex-rage propaganda from the 1930s utterly dissolves. Here’s what we know:

Beyond dispelling the myths of the last century, how does our current understanding of cannabis’ action in the brain inform how it can be used for a healthy sex life? For one, we now recognize that there’s far more to cannabis than just THC, and there’s an extensive array of targets in the brain and body that the cannabinoids act upon to convey their therapeutic and wellness benefits.

CBD’s ability to activate serotonin receptors, which is the same brain chemical system targeted by the well-known anti-anxiety drugs like Prozac, can reduce anxiety to break down the barriers to an intimate relationship. CBD also weakly activates CB2 receptors (the second endogenous cannabinoid receptor to be discovered), which is associated with increased resiliency to life stress.

THC activation of CB1 receptors increases the brain chemical, dopamine, which is involved reward processing and the feeling of “pleasure”. However, repeated high doses of THC can actually lead to a general reduction in dopamine levels, which could hinder the sexual experience. CBD can be used to combat this negative effect of THC, as well as other adverse effects, by blocking some of THC’s actions at CB1 receptors.

Here are some quick tips for introducing and integrating cannabis in your sex life:

Universities across the world are ramping up their cannabis research programs, and the amount of federal research dollars going toward medicinal cannabis is also on the rise. Some of this momentum stems from amassing evidence in support of the wide therapeutic spectrum of the plant, particularly for traditionally treatment-resistant disorders such as certain forms of epilepsy, multiple sclerosis, and depression.

The remarkable tolerability of CBD and balanced THC:CBD products, especially compared to many of the available pharmaceuticals, promotes further investigation into how we can maximize the plant’s therapeutic potential. This process has shed light, beyond just clinical disorders, on how cannabis can be used to improve wellness in otherwise healthy individuals. If enhanced, more intimate sex falls into that category, then the benefits of the plant can impact us all.