Considering that there are around 7.5 billion people in the world, it’s safe to say that you have plenty of viable dating options. But there are lots of reasons why you still might date someone who, deep down, you know isn’t a good match. Maybe you’re blinded by physical attraction. Maybe you’re hoping they will change. Maybe you’re so terrified of being alone, that you’d rather be with the wrong person than be single. Dating someone who you know is wrong for youcan obviously come with quite a few complications, some of which can actually cause some wear and tear on your emotional well-being. That said, who you date, why, and for how long is all up to you and you alone. So, if you’ve decided to keep pursuing a relationship with Mr. or Mrs. Wrong, then you may simply want to keep certain things in mind in order to maintain your sanity and sense of self.

The reality is, you don’t really get to choose who you fall for — that’s simply not how it works. So, if you’ve caught feelings for someone who you suspect isn’t right for you, it makes sense why you’d still be eager to date them, anyway. You can’t shut those feelings off. Fortunately, remembering the following things will help you to stay as realistic as possible about your situation, and moreover, continue looking out for your own well-being first and foremost.

YOU MAY NOT GET THE SEAL OF APPROVAL.

Particularly if you’ve expressed your concerns about your boo being wrong for you, there’s a chance that you won’t get your family’s blessing or your bestie’s seal of approval to be with them. Maybe that’s not a dealbreaker for you. But for some people, it can definitely cause a strain on the relationship. When you know that your loved ones embrace the person you’re dating, you’ll have an easier time inviting them to holiday gatherings or casual hangouts. On the other hand, if they aren’t a fan of your relationship, things can get a tad awkward — or potentially even stressful.

If the people in your inner circle don’t approve of bae, it’s likely either because they think you deserve to be with someone who’s right for you and don’t want to see you get hurt, or they are picking up on something potentially more worrisome about your partner or relationship that you’re too blinded by love to see. So, you may want to listen to the concerns that your friends and family have about your relationship. That doesn’t mean you have to break up with your boo, but as these people usually have your best interests at heart, it’s certainly worth paying attention to their perspectives.

YOU COULD MISS SOMEONE WHO’S RIGHT FOR YOU.

You may still decide that for whatever reason, it’s worth it to you to see this through right now. And that’s totally OK. Just be aware that you have to make room for someone who is right for you, which you can’t do while you’re still in a relationship with someone who isn’t.

Dating someone you know is wrong for you can be risky. You may start overlooking certain behaviors or letting hurtful actions slide even though they don’t sit well with you. So, if you’re going to keep dating someone even though you know they’re wrong for you, make sure to define exactly what you’re willing to accept, and what you aren’t.

This is where boundaries come in. If you know you’re simply not compatible with bae in terms of your communication habits, that’s definitely important information to be aware of. But that doesn’t make it OK for them to treat you poorly, so if it’s bothering you that they’re neglecting to text you back, or going several days without calling, then you owe it to yourself to be honest with them about it. Better yet, start setting healthy boundaries to protect yourself as much as possible. It can be helpful to keep regularly checking with yourself. Ask yourself: How does this relationship make me feel? Are my wants and needs being met?

THERE’S A DIFFERENCE BETWEEN INCOMPATIBLE AND TOXIC.

A partner who isn’t an ideal match may not be super compatible with you. But a partner who’s emotionally abusive? That’s a whole different ball game.

“Someone who isn’t good for you may also engage in a manipulative form of emotional abuse called gaslighting, in which they deny and invalidate your emotional experiences,” dating coach and author Samantha Burns previouslytold Elite Daily. “They don’t take accountability for their wrongdoing, blame you, and somehow even when you know you’re in the right you wind up apologizing just to smooth things over because you’re uncomfortable with the tension. You then start to tiptoe around conflict and worry more about their feelings than your own.”

Make sure to be on the lookout for red flags that your partner is emotionally abusive, because that’s typically a sign that it’s time to make an exit. The effects of that kind of abuse can last beyond your relationship, and your well-being always takes top priority.

Not only that, but Burns pointed out that dating the wrong person can cause your self-doubt and anxiety to surge, thus making dating more difficult for you down the line. Once again, this is why it’s a good idea to keep checking in with your feelings and be alert to any negative impact that the relationship could be having on your emotional or mental health.

YOU CAN’T CHANGE ANYONE.

Are you continuing to date the wrong person for you because you’re hoping they’ll eventually be right for you? The reality is, there’s no guarantee that your boo will change. Certainly, when someone is motivated to focus on self-improvement, they can achieve that. But if they’ve never expressed an interest in changing, and you’re hoping they’ll magically transform into the right person for you, then you may need a reality check.

Be honest with yourself about whether you can be happy with this person as they are, whether that includes commitment fears, trust issues, or conflicting values. Otherwise, you may be falling in love with their potential, not the person they truly are.

Dating someone who’s all wrong for you (yet oh so right) is, in a word, complicated. You may feel internally conflicted about pursuing a romance that isn’t necessarily a perfect fit, for whatever reason. And that’s totally normal, not to mention understandable. Ultimately, only you can decide if this is a relationship that’s still worth pursuing. I’m a firm believer that all dating experiences are valuable in some way or another, so as long as your safety or well-being are not at risk, then there’s no reason why you can’t learn from or grow with someone who isn’t quite a good match. Most importantly, don’t forget that you are fully worthy of fulfilling love — regardless of whether someone is right or wrong for you.

The Rolling Stones recently announced rescheduled dates for their “No Filter” tour after lead singer Mick Jagger underwent successful heart surgery. But for those who don’t want to wait for the Stones to hit the stage, guitarist Keith Richards, legendary for both his iconic rock riffs and his imperviousness to drugs and alcohol, has his own “Keith, Unfiltered” show up right now.

The Morrison Hotel Gallery is featuring five decades of iconic photographs of Richards at all three of its locations: New York City, Los Angeles and Maui.

“Keith, Unfiltered” shows Richards in classic portraits at work and at play, which in his case often involves cigarettes and a bottle of Jack Daniels.

Following are a selection of shots from the show, along with the photographers’ vivid memories of hanging out with perhaps the greatest rock ‘n’ roll guitarist of all time. 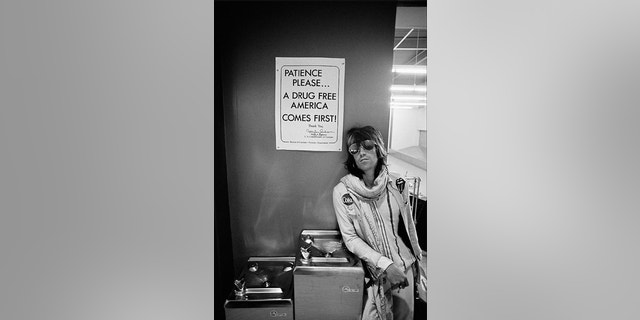 Ethan Russell: “… I was traveling with the Rolling Stones, watching from the sidelines, when I noticed the sign. I called Keith over and took two quick snaps. The customs officer threatened to confiscate the film, so I retired quickly. I knew what I had.” 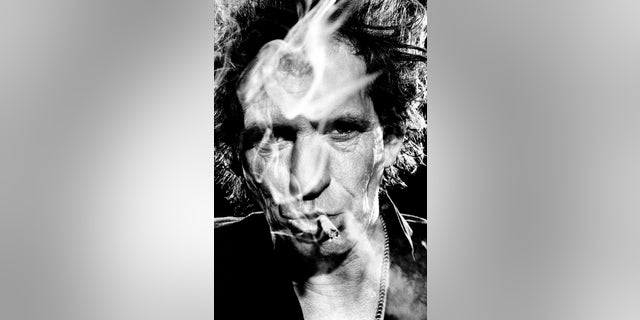 Stephanie Pfriender Stylander: “Black set, hot lights, smoke, drink, music, film, rock and roll, Nikons, ashes, Dolce & Gabbana, ‘how are you doin’ love’, as Keith gets out of the dark limo walking into the studio, we start in this atmosphere, intimate, moving, cinematic and real.” 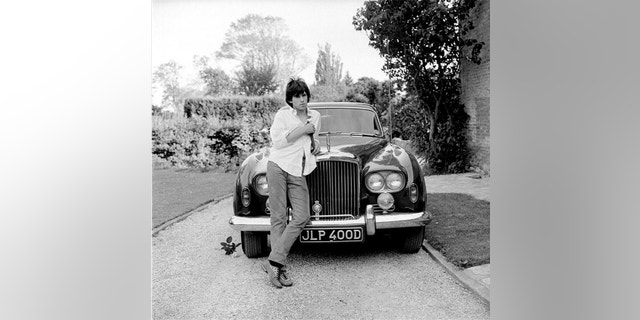 Gered Mankowitz: “In 1966, I photographed each individual member of the Rolling Stones at home so as to create a stock library of these more personal and individual images for press use. By this time there was an increasing demand for such images and the band hated the idea of having unknown photographers coming to their homes. Keith is photographed here at his glorious home Redlands in West Sussex with his beloved Bentley motor car, which he called Blue Lena after the great singer Lena Horne. By this time, Keith and I had become pretty close, and the entire day was a joy of picture taking and giggling with Keith showing his own particular take of this rather cheesy ‘at home’ format!” 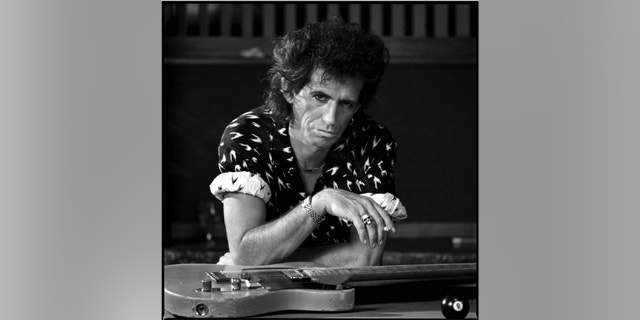 Timothy White: “It was a major coming-of-age moment for me. No publicists or bodyguards, just a rising photographer and this legend I’d grown up listening to. Between rounds of pool and drinks at an otherwise vacant dive bar in Tribeca this is among the few shots we managed to get before heading over to the Hudson to catch the sunset. Crossing Greenwich Avenue, we were stopped by an NYPD office asking Keith to sign his violation book. Moments later, a few more showed up. I tried to rush things along as the sun began to sink, but when a female officer opened her bulletproof vest to reveal the Rolling Stones shirt she wore under her uniform, Keith couldn’t refuse signing just one more autograph. I may not have gotten that moment on film but we did manage to get the shots we were looking for and then some. Turning away from New York’s finest, he told me, ‘I could run for mayor of this town.’ After that day, I’m convinced he could, and win, too.” 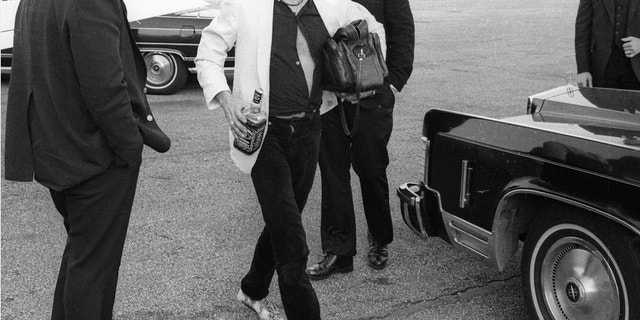 Henry Diltz: “I spent three weeks on the road in 1979 with the New Barbarians; Ronnie Wood’s solo album touring band, which was like the Rolling Stones without Mick Jagger. We traveled on a huge jet plane from city to city. Each time we landed, eight limos would appear on the runway around the plane, and the band members would descend the steps and look for their own private limo and driver. Here, Keith is getting off of the place in St, Louis, looking for his limo and driver and carrying the thing that mattered most… his bottle of Jack Daniels.”

All images are for sale online as well as at each Morrison Hotel gallery.