Ben made his grand entrance down the stairs. I don’t know where he got his costume, but it wasn’t from the Lido. Ben was dressed like … Assassin’s Creed. White hood, extra long black leather vest, with a black leather crossbelt. He had a long white shirt, with blue trim, wrist guards, and high leather boots. OK – I admit it – he looked pretty cool. But Assassin’s Creed? Really?

Eliza and Sheila came down together. I had already seen Ee’s costume, but I was certainly not tired of looking at it. Sheila, though, had gotten quite creative. She had a black kerchief on her head, and long dark hair hanging down to her waist. It was a wig! She also had a white lace shirt that left her shoulders bare, a lace-up corset, and a burgundy-coloured skirt down to her ankles. She had a petticoat, too, but it was transparent. When she lifted her skirts, you could see quite a bit of leg over the top of her high-heeled, lace-up boots. Add to that a black velvet choker … and Sheila looked pretty good.

– “Fantastic.” I told her. “You look sexy and dangerous at the same time.”

Leo finally came down, in his Jack Sparrow costume. He got a round of applause. I had to laugh – he had added the eye makeup.

Then Teresa came out, and she got applause, too. My ex was very, very smart: she didn’t try to upstage any of the players. Her costume was deliberately less sexy than any of the others. She had a tricorne hat, and a really cute dress that looked like a gentleman’s long coat, except that it ended in a skirt. It was burgundy color, with wide black lapels and large brass buttons down the front. Her white shirt was buttoned at the neck, so that she showed no cleavage whatsoever. The shirt had wide, elaborate lace cuffs. The skirt reached to her knees, but high boots and a thick, frilly petticoat meant that she was showing only a couple of inches of skin. For a final touch, she had a replica pistol tucked into a broad black belt.

Compared to Claire and the others, Teresa’s costume made her look like a pirate Mother Superior. She was attractive and authoritative, without the blatant, outrageous sexuality of the others. It suited her, somehow, as if she truly belonged in another century. Understated, yet effective.

– “Everyone except Barbara.” said Eliza.

– “Ah. Well, then – everybody should make sure that they have a fresh drink.” said Teresa.

Barbara was last, of course. No one was surprised. She got to make her grand entrance. And she still managed to exceed our expectations.

Barbara wore a long coat – yes, burgundy-colored. What was it with that colour for pirate costumes? The wide lapels were black, and the lining of her coat featured a swirling pattern of black and gold. She had a white shirt with cuffs like Teresa’s, but the resemblance ended there; Barbara’s neckline was scandalously low, showing an insane amount of cleavage. I wanted to get a ruler or a tape measure and stick my hands in there.

She had a tight little corset lifting and supporting her large boobs, and a gold chain around her neck. There may have been a pendant attached, but I couldn’t see one, as it disappeared into the enormous crevasse between her tits. Her belt had a large, ornate brass buckle. Her legs were snugly sheathed in black tights, tucked into knee-high black high-heeled boots. On top, she had a wide-brimmed black felt hat with a fake ostrich feather.

And would you believe it: she was wearing an eye patch.

Barbara must have spent hours combing all of the costume shops to find the most outrageously sexy components they had. She also wore makeup to match – lots and lots around her eyes. She came down the stairs, slowly, and struck a pose.

I would have bet a sizeable fortune that every guy there was hard as a rock. It wasn’t just Barbara – though she could have cause a riot in a monastery – it was the combined effect of six very attractive women dressed to match a variety of male fantasies.

Dick Dale, the surf rock pioneer who took reverb to new levels, died on Saturday night. He was 81. The guitarist’s health had declined over the past 20 years due to a number of illnesses, including diabetes, kidney disease and rectal cancer. The news was confirmed to NPR by Dusty Watson, a drummer who worked and toured with Dale between 1995 and 2006, who says he spoke with Dale’s wife, Lana Dale. No cause was given.

Dale, born Richard Anthony Monsour in 1937, changed the sound of rock and roll in the early 1960s when he upped the reverb on his guitar and applied the Arabic scales of his father’s native Lebanon. Born and originally raised in Massachusetts, he found his aesthetic when his family moved to Orange County, California in 1954 — where he took up surfing.

His high-energy interpretation of an old song from Asia Minor, “Misirlou” (Egyptian Girl), became the most famous song of surf rock: He had learned the tune from his Lebanese uncles, who played it on the oud.

“I started playing it,” Dale, who had started out as a drummer, told NPR in a 2010 interview, “and I said, ‘Oh no, that’s too slow.’ And I thought of Gene Krupa’s drumming, his staccato drumming… When we went to California, I got my first guitar, but I was using this rocket-attack, Gene Krupa rhythm on the guitar.”

And that wildfire-tempo song became his signature: Dale self-released “Misirlou” as a single on Deltone Records in 1962, which led in part to a deal with Capitol Records to distribute his first album, 1962’s Surfer’s Choice. Dale’s first album for Capitol was 1963’s King of the Surf Guitar; he said that fans at an early show came up with the honorary moniker.

Dale’s collaborations with guitar inventor Leo Fender also made sonic history. “I met a man called Leo Fender,” he told NPR, “who is the Einstein of the guitar and the amplifiers. He says, ‘Here, I just made a guitar, it’s a Stratocaster. You just beat it to death and tell me what you think. So when I started playing on that thing, I wanted to get it to be as loud as I could, like Gene Krupa drums. And as I was surfing, when the waves picked me up and took me through the tubes, I would get that rumble sound.”

Fender and Dale also worked together on amplifiers, Dale told Fresh Air‘s Terry Gross in 1993. “I wanted to get a fat, thick, deep sound,” Dale remarked.

Fender kept trying options, but Dale still wasn’t satisfied. “We kept on making all these adjustments with output transformers, with speakers,” Dale told Fresh Air, “and that’s how I blew up over 48 speakers and amplifiers. They’d catch on fire, the speakers would freeze, the speakers would tear from the coils … So he went back to the drawing board came up and invented the Dick Dale Showman amplifier, and the dual Showman amplifier with the 15 inch Lansing speaker. That was the end result … along with the creations that we did on the Stratocaster guitar, making it a real thick body because the thicker the wood, the purer the sound.” 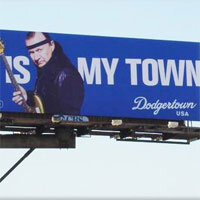 Three decades after he first released his most famous tune, Dale and “Misirlou” had a wave of resurgence after the song was featured in the opening credits of Quentin Tarantino’s 1994 film Pulp Fiction. The movie’s soundtrack sold more than 3 million copies and helped put surf rock — and Dale himself — in front of a new generation of music fans. New compilations were issued and he was even booked on the 1996 Warped Tour.

Over the decades that followed, he released two more albums and kept playing in front of live audiences. “I make my guitar scream with pain or pleasure or sensuality,” he told NPR. “It makes people move their feet and shake their bodies. That’s what music does.”

Rest in peace, Mr. Dale. You will be missed, but your unique sound lives forever.

After my wonderful first date with the lovely Kimiko, I really wanted to see her again. I was going to try to set something up for a lunch this week. I also sent her a link to this great documentary about the Asian Bank, “Abacus: Small Enough Too Jail.” (If you’ve been following this blog you’ll know that I saw that film in the theater with Ambria.)

“I’m at the salon working too! I’ve been thinking about our fun date last night!”

“Not too busy here tonight. Rain is keeping people away.”

“Would you still be up for lunch on Thursday?”

“Hey, I’m done work now. Thursday I have a doctor’s appointment at 2pm. What time is good for you?”

“My doctor’s office is in Moorestown. Quite far away from the city. You have to work Thursday?

“Weekend better for you?”

“Aww! Saturday after 5 or Sunday after 4pm? Movies? Or I could do a Zip Car and come to Jersey. Or I could hop on Patco and we could dine in Haddonfield or Collingswood.”

“Great! We can talk later.”

The week passes and so does the weekend. I don’t hear from her at all. I really like Kimiko and want to hang out with her again. (And kiss her again!) My schedule just really sucks right now.  I decide to make another attempt.

“Hi Kimiko. Have you lost interest?”

“I wanted to after I came up with a few solutions on how we could meet and I didn’t hear from you for the weekend. Maybe it was a misunderstanding.”

“You know what, it’s a misunderstanding, because I didn’t hear from you again, I thought you went on another date.”

“No. Like I said I have been working a lot lately. I like you and I thought our first date went really well.”

“Things have been busy getting this business off the ground. But I want to stay in touch with you and find ways to spend time with you whenever we can!”

“Yes! Sounds good! Because this weekend I’m going to New York for a baby shower.”

“Sounds good. I’m so glad we chatted tonight. I feel so much better and I hope you do too, Kimiko.”

“I guess, but I think we have a good connection.”

“Awesome. “Well have fun at the shower up in New York. We’ll chat again soon!”

So I’ll leave it there for now. Hopefully once I get through the next week, I should have some free time to see her. I don’t want her to get away, but I fear that if I wait too long she will.