I think because I was doing well in school and they had failed me as parents in my obvious musical upbringing and had handed over their money to Mr. Buckwalter to teach my sister Janice piano lessons so she could please my dad and not be able to play a fucking note they had no choice.

I started to think about buying a real guitar. I was excited about the notion of getting a REAL guitar. Obviously, this rock and roll thing was sticking and I needed a proper instrument. Jim had a Fender Stratocaster and it was a good guitar but it was brown and sensible. A Gibson Les Paul was simply too heavy and way too expensive.

One day I was reading Creem or Circus magazine, (Other than Rolling Stone, they were the two leading music mags of the time) I saw Paul Stanley from the band Kiss playing an interesting-looking ax. The way it looked really touched something in me.

Yes. That was the guitar for a future rock star.

I had to have that.

A 1979 Black Ibanez Iceman. Double humbucker pickups. Rosewood neck, and a sexy young body. Just like the girls I liked. That hook. That stinger. Yes!

I had to have that guitar.

Jim had introduced me to a guy that gave guitar lessons in town. He was an older dude whose father owned a storefront down on Pacific avenue when that meant something. It was a radio and TV repair store. A dusty old place that felt like its time had come and gone.

I was surprised how many people Jim knew at his tender age, but he was a seeker and was always thirsty for knowledge. He somehow found Charlie Billaris the son who was this great guitar player back in the day.

He introduces me to Charlie and he’s a really nice older guy. (Now when I say older, I mean back then, the late twenties because we were so young) He had been teaching Jim some songs and I thought he was cool.

We would sit in this old store full of old TVs and radios and just jam. It was beautiful and primitive. He had taught Jim and I wanted some of that. I think I would give him ten bucks and he would teach me songs by Led Zeppelin and basic blues runs.

Charlie was a great guitar player. He had once played in a band called 12 Gauge years ago but they never made it and now he worked in his dad’s shop. I wondered how a guy that was this good had never gone forward to pursue music full-time. But he was married now with a baby and had already been burned out from the circuit. I assured him that would never happen to me. I was going to be a rock star like Joe Perry and become a great songwriter.

“How can Keith Richards be such a drug addict and still perform and make great records with the Stones?”

That was his only answer. He was right. Simple and complete. He was older. He knew stuff.

He taught me so much. I got better. I started to really understand my little Silvertone guitar so much better. Under Charlie, I wrote better more melodic songs and was really coming along as a guitar player. I wanted it so bad it was coming on fast. My mind was starving for rock and I just breathed it all in. I would go home and learn the songs and keep writing and playing non-stop in my room.

One day Jim and I were at Charlie’s house just hanging out and jamming. Jim starts talking about how I was thinking about getting a REAL guitar.

I tell Charlie the guitar I’m dreaming about.

“I can get you that. But I have to go to New York to get that baby. She’s rare.”

I had to clear that whole transaction with my parents because it would be my entire savings from working as a busboy all summer at the Dolphin restaurant for this guitar.

I think because I was doing well in school and they had failed me as parents in my obvious musical upbringing and had handed over their money to Mr. Buckwalter to teach my sister Janice piano lessons so she could please my dad and not be able to play a fucking note they had no choice.

It was money I had earned being a busboy so they technically couldn’t say shit. I’m doing my homework. I’m excelling as a student. I’m not getting into trouble. I’ve somehow adjusted to this nightmare I’ve been dropped off into so let me do what I want with my money.

I gave Charlie $250 to go get the guitar of my dreams in New York City. That seemed like a world away back then.

A week later I get a call from him and he says he’s back and he has her.

I call Jim. We have to go together to collect my dream!

We walk out to Charlie’s house and I’m excited and apprehensive. This is the biggest purchase of my life and it’s tied to my greatest love of all time. MUSIC!

We knock on his door and his wife answers. (Lisa was a hot little blonde. Just saying….musicians pull sweet tail)

We go in and Charlie comes out. We’re nervous and excited because we both are anticipating what’s supposed to happen. We sit down and he offers us both a beer. We’re teenage boys so of course, we’re going to respect and accept but we’re not really drinkers. (Yet… Me. Not Jim)

We’re nursing out beers trying to be cool during this watershed moment in my young life. Then he brings out this black rectangle flight case and lays it on the sofa like a coffin. My mind can’t comprehend what’s inside of that box.

“Go ahead. Open the case.” Charlie’s wife is smiling. 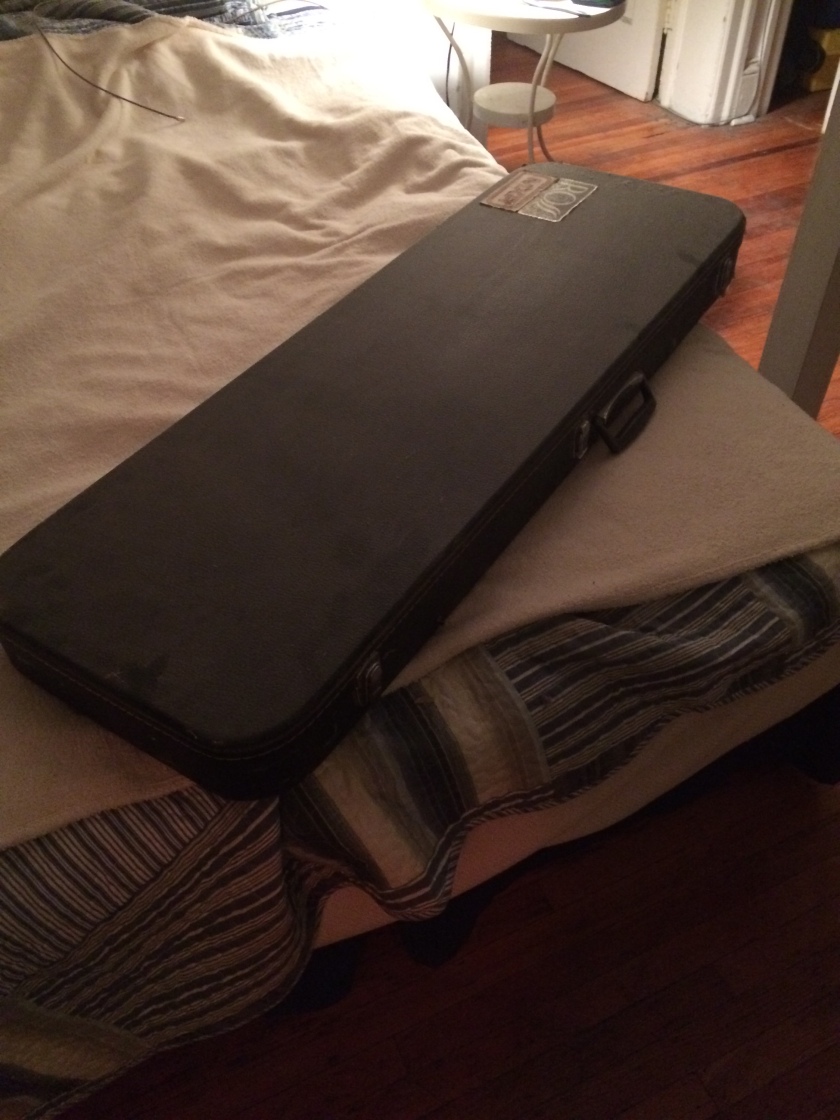 I set my beer down and go to the flight case. I unsnap the buckles and locks on the case. I slowly raise the lid. 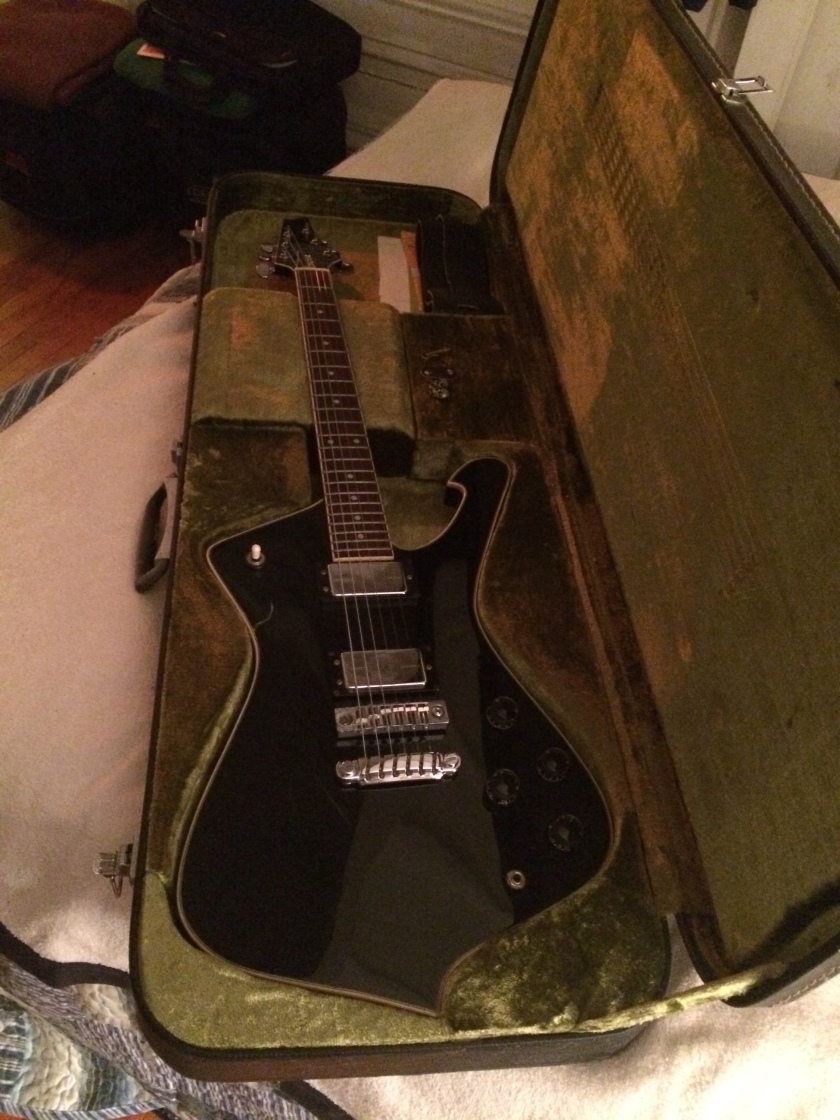 That’s my new axe! That’s my girl! That’s going to be what will carry me forth in rock and heavy metal in my future. I already feel that I am going to go beyond Wildwood and everything in my worthless anxiety-filled life with her!

On the little box inside the case where you keep your picks, slide, and other cool goodies I decorated it with twin skulls, a little scarab, and a miniature Iceman pin!

This IS Rock and Roll. I have arrived on life’s stage as a musician. A worthless nothing with depression and anxiety has taken a step to strap on an elegant guitar to make great music for the world and be a star!

I told Charlie I had the other half of the money in my account. (That guitar cost $500 in 1979. That’s a shitload of cash for a busboy back then. That’s basically all I made that summer) He is hesitant to let her go, but his wife intercedes.

I promise to bring Charlie the difference tomorrow, and they let Jim and I leave with my brand new battle-ax.

I had to stop two times on the way home and open up the case and just look at her again because she was so beautiful. She was the most beautiful guitar I had ever seen and I couldn’t believe she was mine. Having this guitar and looking upon her was like taking little Terri to Star Wars and kissing her for the first time and feeling what love was.

It was just an amazing time-stopping moment to stand under the street light at 22nd and Central with my best friend and favorite guitarist and open that case and look at that guitar.

It reminded me of when I was there when my mom first saw the shore house completely remodeled by my dad.

“Oh Hoss… this is too nice for us.” my mother said.

This was too nice for us. But I’m an overachiever and this is the perfect guitar for me.

I have arrived.  I just hope Jim and I can make the band work out.

Here’s an amusing footnote: The Ibanez Iceman that brought me years of joy upon acquiring it cost me a whopping $500 in 1979. An incredible instrument!

A friend of mine recently sent me this…

Nice investment that I’d like to be buried with.

Oh, and still rocking out today… 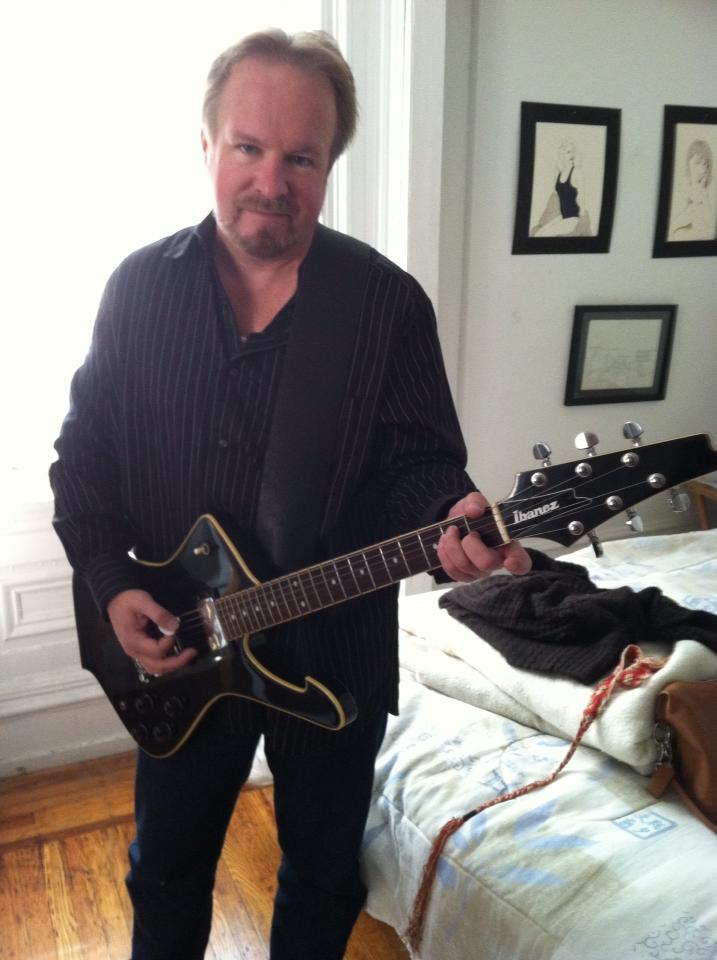 Here’s a song I used to love to listen to at the beach in the summer of 79. Great pop song and solo.